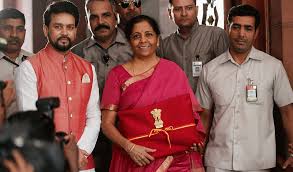 India raises import tariffs, taxes on the super rich as it seeks growth

India raised import tariffs on nearly 75 items including gold and automobile parts in its budget on Friday and increased taxes on the rich to help pay for recapitalising banks and supporting small business in a bid to revive sagging growth.

Aiming to restart investment that’s at its weakest level in years, the Prime Minister Narendra Modi’s government also proposed giving foreign investors a bigger role in India’s giant insurance and aviation sectors, which have been tightly controlled for decades.

Finance Minister Nirmala Sitharaman unveiled the proposals while presenting to parliament the budget for the fiscal year ending March 31, 2020, the first since the Hindu nationalist-led government was re-elected in a vote spanning April and May.

Modi, boosted by his election victory, has set a target of growing India into a $ 5 trillion economy by 2024/2025 from $ 2.7 trillion. A government report on Thursday said this will be done on the back of higher investment, savings and exports in the way China’s growth was propelled.

“This budget is setting out a vision, a target, for every sector of our society,” Sitharaman said to the thumping of desks in parliament.

GDP growth slumped to 5.8% in January-March, the lowest in 20 quarters. Growth for the last fiscal year, at 6.8%, was also a five-year low. All important indicators of economic activity, like the dipping index of industrial production and plummeting automobile sales, confirmed the slowdown.

But the government did not announce a big jump in public spending, contrary to expectations. Sitharaman said the fiscal deficit for this financial year would be trimmed to 3.3% of GDP – which analysts said was likely based on ambitious expectations of higher tax collections.

“Commitment to restrict fiscal deficit at 3.30% compared to 3.40% is a good intent, but we need to look at the revenue assumptions more closely to draw more comfort,” said Joseph Thomas, head of research, Embay Wealth Management in Mumbai.

Capital Economics is sceptical about the deficit target. “The fiscal maths don’t add up,” it said.

Sitharaman raised import duties on gold and other precious metals to 12.5% from 10%, and levied an import tax of one rupee per tonne on crude oil to boost central revenue just as global oil prices have softened from their highs.

The government also increased local levies on a litre of petrol and diesel by two rupees each, stoking fears of inflation.

The finance minister said the government would provide state-owned banks 700 billion Indian rupees ($ 10.23 billion) of additional capital that are laden with bad debt which has affected their ability to lend and also spur economic growth. Indian banks and financial institutions, in all, hold bad debt of over 10 trillion rupees.

The government raised income tax surcharge on people with an annual income of more than 20 million rupees who make up the top end of Indian society.

“This budget is a mixed bag with a significant increase in taxation for the wealthy. Also, the increase in excise duty for petrol and diesel will stoke inflation,” said Abhimanyu Sofa, head of research at IIFL Securities Ltd.

Sitharaman cut corporate tax rates to 25% from 30% for companies with an annual turnover of up to 4 billion rupees, from current ceiling of 2.5 billion rupees.

But there was no move forward on the government’s long-time goal of across-the-board cutting of corporate taxes – now about 35% – to make India more competitive with other countries. In 2018, average corporate tax was 25% in China and Indonesia, 24% in Malaysia and 20% in Thailand, according to KPMG.

The government said 100% foreign ownership will be permitted for insurance intermediaries and local sourcing norms will be eased for FDI in retailers selling a single brand.

At present, India allows 49% foreign ownership through the automatic route in the insurance sector, which is worth billions of dollars and has been tightly controlled for decades for fear of a backlash from the unions.

“It is high time India gets fully integrated into the global value chain of production of goods and services but also becomes part of the global financial system to mobilize global savings mostly institutional in insurance, pension, and sovereign wealth funds,” Sitharaman said.

But economists say scaling up Asia’s third largest economy in rapid fashion will need bold reforms including freeing up land and labour markets, which Modi shied away from in his first term for fear of political backlash.

Capital Economics said in a note that reaching that target “is dependent in large part on achieving real GDP growth of 8% a year, which we think is unlikely.”

Land and labour reforms are difficult in a democracy like India and it seems unlikely Modi will risk drawing the ire of his Bharatiya Janata Party voters that gave him a huge re-election mandate.

Sitharaman set an ambitious target of sale of stakes in state-run companies to 1.05 trillion rupees ($ 15.33 billion) from 850 billion rupees raised in the previous fiscal year.

A plan to sell the national carrier Air India has failed for lack of buyers and in the last couple of years the government has reached its target by selling its shares in one state-run firm to another in a sleight of hand.

Indian shares fell on Friday as Sitharaman proposed increasing the minimum public shareholding in listed companies to 35% from 25%, threatening a wave of new issuance.

But bonds and the rupee firmed after the government trimmed this year’s fiscal deficit target and said some of its borrowing would be made offshore.