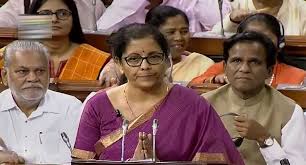 Finance Minister Nirmala Sitharaman unveiled the proposals while presenting the budget for the fiscal year ending March 31, 2020 to parliament, the first since the Hindu nationalist-led government was re-elected in a vote in April and May.

“(It is) an improvement on the interim budget with a number of reasonably good proposals on disinvestment, bank recapitalisation and quite a substantial discount on affordable housing in taxes. Focus on affordable housing and infrastructure is noticeably higher compared to earlier budgets.”

“Commitment to restrict fiscal deficit at 3.30% compared to 3.40% is a good intent, but we need to look at the revenue assumptions more closely to draw more comfort. A partial dependence on external markets for government borrowings may help the government meet the borrowing targets, but the dynamics of currency management and its impact on yield movements should not be ignored.”

“I liked the progressive undertone of this budget, which is the need of the hour. Measures taken to increase the growth capital of PSBs and to address the funding crunch of sound NBFCs will put energy into important credit intermediaries.”

“What I am not comfortable with is the proposed sovereign bond issue, which has the potential to impact financial stability if financial stress event takes place.”

“This budget is a mixed bag with a significant increase in taxation for the wealthy. Also, the increase in excise duty for petrol and diesel will stoke inflation.”

“On the positive side, reducing stake in PSUs and borrowing money in overseas markets is a good move. For NBFCs, some of their challenges are likely to be resolved as there is a clear signalling from the government to increase credit lines by banks.”

“The budget strikes a reasonable balance between addressing the objective of inclusivity and laying the path for a $ 5-trillion economy by focusing on infrastructure spending, incentivising affordable housing, providing growth capital for PSU banks and signalling support for sound NBFCs.”

“Additional areas of spending have been created not at the cost of higher fiscal deficit. The fiscal deficit has been reduced by 10 bps to 3.3% in FY20, which is heartening.”

“…While we need to await SEBI regulations regarding how much time will be given to these companies to meet with minimum public shareholding norms, the overhang of this requirement of off-loading of promoter shareholding can have a significant impact on the markets and the specific stocks. The regulator needs to provide sufficient time to meet this requirement so as to not over-flood the markets with stake sales by promoters.”

“Agriculture sector is a major employment generator in the country and is currently reeling under stress. Hence, Sitharaman’s focus on agriculture and rural sector is a welcome step.”

“Moreover, the proposals to make India an electric car manufacturing hub, large investment in quality higher education, focus on building infrastructure, efforts to widen tax net, incentives for start-ups etc. are big positives. She also proposed to provide 700 billion rupees for PSU bank recapitalisation and raised the disinvestment target to 1.05 trillion rupees, which will be taken positively by the market.”

“On the downside, the proposal to increase minimum public shareholding in listed companies to 35% could negatively impact some companies. If budgets in the coming years keep focusing on the right areas, the target of making India a $ 5-trillion economy in the next 5 years looks achievable.”

“There was widespread expectation of a stimulus to combat the current slowdown. The budget did not announce any stimulus. On the contrary, (it) raised some of the taxes. Also, fiscal deficit target for FY20 was revised down to 3.3%, which is surprising.”

“The nominal GDP growth assumption is realistic and can be achieved with giving a boost to infrastructure. The economy has enough strength to achieve this growth rate, however, the risk to this forecast would be from a financial market turmoil, or an increase in commodity prices like oil which may result in a significant depreciation of the rupee.”

“The increase in public shareholding from 25% to 35% is a good step for deepening of capital markets. It also means that many companies will need to increase their public shareholding, mostly by selling of promoter stake or additional equity issuance. The requirement to meet 35% would result in companies needing to offer approximately 1 trillion rupees to the public.”

“The additional supply of equity should keep a lid on valuations, but in the longer term, (it) should help in getting more retail money in equity markets.”

“The move to increase minimum public shareholding for listed companies from 25% to 35% must be implemented carefully. Timing, applicability, etc (need) to be closely evaluated. We don’t want this to be another ‘forced sale’. (This is a) good opportunity for institutional capital and funds.”

“The proposed announcement to increase minimum shareholding threshold from 25% to 35% is a move to increase public participation in listed entities, thereby fortifying the fundamentals of governance.”

“One would need to evaluate once the fine print is available (as the FM mentioned that SEBI will be issuing the requisite circulars) as there would be some clarifications expected, including on grandfathering of existing situations, movement to the desired threshold.”

“The government has the primary focus on infrastructure building. However, we need to see what the cost and budgeting of the same will be.”

“The budget is not very different from the interim budget even as market participants await fiscal deficit proposals.”

“Trade will be fluctuating. Until the fiscal deficit proposals are heard, one should not jump to conclusions.”