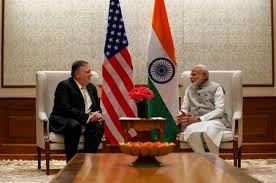 U.S. Secretary of State Mike Pompeo met India’s Prime Minister Narendra Modi on Wednesday for talks on trade and defence issues that have strained ties between the countries.

Indian broadcasters showed footage of Pompeo exchanging handshakes with Modi at the prime minister’s official residence in the capital New Delhi on Wednesday morning. Neither side released details of the meeting.

India’s relations with Russia and Iran – both under U.S. sanctions – are also a sore point.

Under U.S. pressure, India has stopped buying oil from Iran, one of its top suppliers. The United States has also stepped up pressure on India not to proceed with its purchase of S-400 surface-to-air missile systems from Russia.

Pompeo is scheduled to have lunch with foreign minister Subrahmanyam Jaishankar, followed by a news conference at 1400 local time (0930 GMT), the foreign ministry said.

He is expected to round off the trip with a policy speech hosted by the U.S. Embassy on Wednesday evening, before departing on Thursday for the G20 summit in Japan.