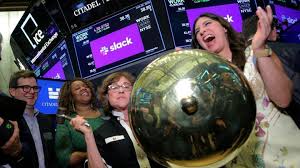 This VC Firm Invested $200 Million in Slack. Now Its Stake Is Worth $4.6 Billion

Stewart Butterfield loved the game, but not enough people agreed with him. He spent two years and raised roughly $ 11 million to build an online adventure game called Glitch that featured garrulous, blue-headed creatures and milk-drunk butterflies.

Once people had a chance to play it and Butterfield could track the numbers, the verdict was clear: Glitch was a flop. “There was this night where I just lost faith,” Butterfield said in a podcast interview. He decided in 2012 that it was game over. Butterfield made plans to shut down the company and give the remaining money back to his investors.

Andrew Braccia, a partner at venture capital firm Accel, wouldn’t accept the refund. He and other investors urged Butterfield to keep the remaining $ 5 million and try something else. That turned into Slack Technologies Inc., the maker of corporate chat software that went public Thursday. At the close of trading, Slack’s market value was $ 19 billion.

Accel invested about $ 200 million in Slack over seven years, largely driven by Braccia’s unwavering faith in Butterfield. As of the stock debut, Accel held 24% of the company, the biggest VC stake in a newly public unicorn in recent history. Those shares are worth $ 4.6 billion today.

Owning such a large chunk of a company is unusual in venture investing for a couple reasons. If a startup appears to be succeeding, founders and other investors compete fiercely for shares. And when things are uncertain, overexposing a fund to one company can be a foolish gamble. “They don’t all look like winners right away,” said Trae Vassallo, managing director of early-stage venture firm Defy.

The startup failure rate is 67%, according to research firm CB Insights. Just 1% of those achieve a unicorn valuation of at least $ 1 billion. “You have to have a clear conviction when making a concentrated bet,” said Byron Deeter, a partner at Bessemer Venture Partners. “If you’re right, you’ll be disproportionately rewarded. But if it goes bad, there’s a real risk.”

Slack is what happens when a risky bet pays off. The value of Accel’s stake is greater than that of any private financier of Lyft Inc., Snap Inc., Spotify Technology SA or Twitter Inc., each of which went public at higher market values.

In an interview Thursday, Butterfield said Accel was eager to buy into every funding round for Slack—of which there were many—and offered to invest more than expected almost every time. The company had raised more than $ 1.2 billion in private capital, according to CB Insights data. “Our whole board, the VC members of the board, have worked incredibly hard,” Butterfield said. “I feel incredibly well supported.”

In the windup to Slack’s listing, Accel converted about a quarter of its Slack holdings to common stock, allowing it to sell that portion of its shares. Such a transaction could return more than $ 1 billion for the VC firm, earning back the total sum of several funds. And that doesn’t account for two other Accel companies that have gone public since April, Crowdstrike Holdings Inc. and Pagerduty Inc.

In 2012, when Butterfield was convinced he’d failed, Braccia was steadfast, said Bradley Horowitz, who put some of his own money in the game company. That’s probably because Braccia recalled what happened the last time Butterfield made a bad game. It morphed into a popular photo-sharing site called Flickr, which Yahoo! bought for around $ 25 million in 2005. Braccia, Butterfield and Horowitz all worked together at Yahoo.

Horowitz, now a vice president of product at Google, said Braccia “was the one who said ‘keep going.’ He had the determination.” Horowitz joined Braccia in refusing to take his money back when Butterfield was ready to give up. “Stewart could have told me he was building a new coat hanger,” Horowitz said. “I would be all in.”

Braccia declined to be interviewed, citing the regulatory quiet period. Bloomberg Beta, the venture capital arm of Bloomberg LP, is also an investor in Slack.

In 2015, just as Slack was beginning to gain traction, Braccia explained why he was making such a big bet on the company. Butterfield has an uncanny ability to recover from failure and then rally people around his next idea, Braccia told a crowd at the time: “He’s resilient. He’s been knocked down multiple times, and he’s picked himself back up.”