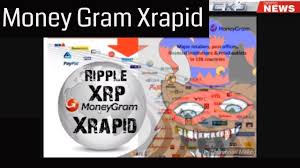 Cryptocurrency company Ripple on Monday announced a major partnership with MoneyGram, which will see the money transfer service use the digital currency XRP as part of its day-to-day operations.

Under the terms of the deal, Ripple will pay $ 4.10 cents a share to acquire an 8% to 10% stake in MoneyGram. This translates into a $ 30 million investment, and also gives MoneyGram the option for another $ 20 million cash infusion in the next two years.

For San Francisco-based Ripple, the deal will provide an unprecedented opportunity to make the case that its product called X-Rapid, which allows for the transfer of XRP, is superior for moving money across borders. Ripple has long argued that banks should use XRP as a form of bridge currency, rather than leaving money tied up as collateral in foreign accounts.

“This will eliminate the need to deploy foreign bank accounts. That’s why MoneyGram has negative working capital. It will help customers and also smooth out their treasury operations,” Ripple CEO Brad Garlinghouse told Fortune.

Ripple’s investment comes a year after MoneyGram’s rival Western Union ended a trial experiment with XRapid, saying the XRP transfer service had not produced any significant savings. Ripple has also engaged in numerous pilot projects with banks in the past three years, but none of these has resulted in a breakout moment for XRP.

Garlinghouse, however, claims that the tide has turned in recent months, saying hundreds of partners are now using XRP, which has a total implied value of about $ 18 billion and is the third most valuable cryptocurrency after Bitcoin and Ethereum. He added that this has produced a highly liquid supply of XRP, meaning that the risk of volatility is all but eliminated since financial firms can move into and out of the currency in seconds.

For MoneyGram, the Ripple investment provides an opportunity to firm up its finances after recent losses and several dismal earnings reports that have caused its share price to slump. It also comes 18 months after the U.S. government barred China-based Ant Financial from acquiring the company.

Ripple’s purchase of newly-issued shares of MoneyGram is a significant premium on MoneyGram’s recent market price, which has languished around $ 1.50—but a far cry from the $ 18 that Ant Financial reportedly offered.

According to the companies, Ripple will not immediately receive a seat on MoneyGram’s board, but will instead have observer status.

“We are very pleased with the terms of the Ripple investment which supports the Company with permanent capital and additional liquidity,” Larry Angelilli, chief financial officer of MoneyGram, said in a statement. “This partnership also provides MoneyGram with the opportunity to improve operating efficiencies and increase earnings and free cash flow.”