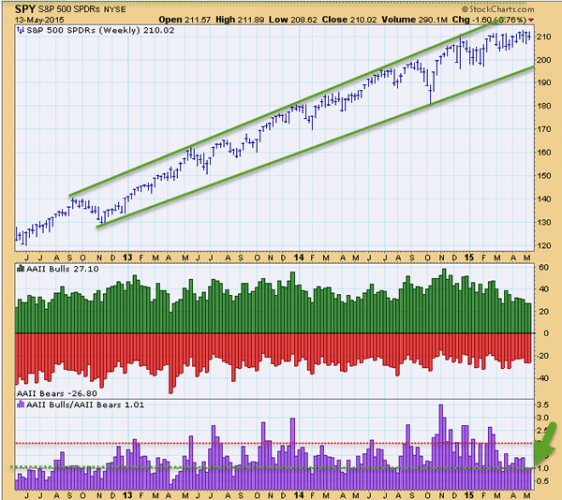 Despite the chorus of analysts and investors calling for the long-awaited correction, the market is showing some constructive bullish signs.

First, deterioration in the U.S. dollar has buoyed large-cap stocks, which are once again outperforming small caps. This removes a large headwind for the capitalization-weighted major stock indices as a stronger dollar negatively impacts foreign profits.

Second, sentiment has soured greatly despite the fact that the market remains near its all-time highs.

Below is a chart of SPDR S&P 500 ETF (NYSE: SPY) with data from the American Association of Individual Investors (AAII) sentiment survey. We can see a major decline in bullish sentiment and increase in bearish sentiment. And the ratio of bulls to bears, shown in the bottom panel, is now at levels where previous rallies have started.

Finally, the market trend is up. You can see the trend channel clearly in the chart above.

It’s easy to get emotional when you’re investing. Stocks can elicit feelings of love or hate, fear or greed. But perhaps the most common emotion in the market is hope — investors buy stocks hoping they will move higher.

I prefer something more tangible — proven metrics that research has shown indicate a stock’s likeliness to outperform. That is why I rely on a quantitative system to alert me to buys and sells. It’s mathematical, it’s based on indicators backed by decades of research, and it doesn’t play favorites. It gives every stock on the market a score between 0 and 200, allowing me to rank them from best (200) to worst (0).

The system was designed to spot stocks on the verge of a breakout, and it’s been incredibly successful. A biotech with a score of 198 went on to rally 115% over the next seven months. A coal stock with a 158 score soared 135% in 10 months. And shares of an Internet company with a 170 score returned 242% in a year. The only thing these three stocks had in common was their high rank.

The other clear benefit of this quantitative system is that it tells me unequivocally which stocks to avoid. I only consider buying stocks with a score above 140, but the stocks below have scores so low they are in the bottom 6th percentile of the market.

If you own any of these names, I would sell them now or risk seeing even more of your money vanish. And if you don’t own them, I would stay far, far away from these dogs.

The bad news just keeps rolling in for Wynn Resorts (NASDAQ: WYNN), which has seen its shares almost sliced in half over the past year.

In late April, first-quarter earnings missed analysts’ estimates by a wide mark thanks to a major slowdown in revenue from Macau, and the company cut its dividend by two-thirds.

As if that wasn’t bad enough, this week, WYNN’s largest shareholder, mega mutual fund firm T. Rowe Price cut its stake in the stock by nearly 40%.

And the latest sell-off was sparked by a downgrade from a Barclays (NYSE: BCS) analyst who said on Friday that it was “too early to call a bottom” in the Macau gaming market. He lowered his price target from $ 160 to $ 105.

Given WYNN’s score of 38 out of a possible 200 on my own system, I think that’s much too generous. I see shares headed to the support zone below $ 100 and likely much lower.

Beauty products company Elizabeth Arden (NASDAQ: RDEN) missed analysts’ estimates by a country mile when it reported last week, posting a per-share loss of $ 0.86 versus a forecast of $ 0.47. Quarterly sales dropped 9% on weakness in its fragrance segment.

The chart also shows a company in trouble. Shares have broken support dating back to August’s capitulation low, and with a score of 32, the odds favor continued selling.

Last and certainly least, is Keurig Green Mountain (NASDAQ: GMCR) with a score of 29.

The company also recently reported worse-than-expected sales and earnings, and management lowered expectations for the remainder of 2015 on weak sales of its new coffee brewer.

Consumers seemed displeased with the high price tag and the fact that the Keurig 2.0 was designed it to be incompatible with refillable K-Cups and third-party brew pods. The company saw the error of its ways and announced this month that it would rectify the situation, but it may be too little too late.

On the chart, GMCR sports a large head-and-shoulders top with a downside price projection of below $ 80.

The beauty of having a system like mine is that it takes the emotion out of trading. Whether you love or hate these companies or their products is irrelevant — they are clear sells. Do not try to catch these falling knives.

If they were to one day stage a turnaround, my system would almost certainly spot it in time to participate in the majority of the run higher. For instance, it just signaled “buy” for a stock in a hated sector that many investors are too scared to enter after being burned for the past year.

I plan to discuss that further this week. In the meantime, if you want to know more about my system, I’ve put together a free report that explains how I use it to spot stocks before they make huge runs in a matter of weeks or months. Click here to access it.