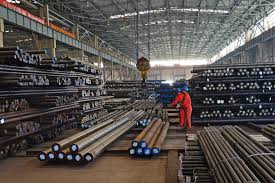 U.S. Tariff Deal with Mexico, Canada Is Also About Cutting Off China’s Steel

The U.S. has reached an agreement to drop steel and aluminum tariffs on the two countries in return for preventing Chinese steel from coming over their borders into the U.S.

In a speech before the National Association of Realtors, President Trump said, “I’m pleased to announce that we’ve just reached an agreement with Canada and Mexico and will be selling our product into those countries without the imposition of tariffs or major tariffs,” according to Bloomberg.

This would remove one barrier the new USMCA agreement, the replacement for NAFTA, has faced in getting passage from Congress. Reactions have been relatively positive. “It’s a pretty good agreement,” said Usha Haley, a professor of management and director of the Center for International Business Advancement at Wichita State University and co-author of Subsidies to Chinese Industry. “It looks promising and I think it’s a win for Trump.”

“One client of mine, who fabricates and sells critical components to the world’s leading airplane manufacturers, has resorted to stockpiling their own supply of internationally sourced steel in their parking lot as trade negotiations play out,” Carlos Martinez, a principle with southern California-based accounting firm Haskell & White, wrote in an email to Fortune. “Today’s news comes as a relief as it brings some clarity to metal pricing in North America.”

The United Steelworkers sent a statement to Fortune that quoted USW International President Leo W. Gerard as saying, “Today’s agreement will help restore confidence and stability to the North American steel and aluminum markets. From day one, we made it clear that the real problem isn’t Canada or Mexico, but those countries that are undermining the trading system through predatory trade practices and non-market policies that have created massive overcapacity and trade imbalance.”

The second sentence hints to a lynchpin of the deal. Beyond a mutual end to tariffs, Canada and Mexico will agree to prevent Chinese steel from crossing their borders into the U.S., as the Washington Post reported.

On the surface, steel from China would seem something of relatively low importance. According to the International Trade Administration, the country isn’t even one of the top ten sources of steel imports into the U.S.

However, the picture is actually murky because of an economic term called trade deflection. “When you have a trade agreement with Canada and Mexico, they can have completely different agreements with other countries,” said Giacomo Santangelo, a senior lecturer in economics at Fordham University. Steel from China can be incorporated with products from either country and then come into the U.S. with the country of origin wiped clean. “It’s literally just an additional step [to get the products in],” Santangelo said.

The U.S. has complained that China floods markets with cheap steel that depress prices and undermine competing manufacturers. “Trump intuitively understands the situation in Chinese steel,” said Haley, who has studied China’s steel production closely. She said the country provides at least a 30% subsidy to its steel production “through government loans that don’t have to be repaid, free power, free land, and so on.”

Then there is the constant increase in its production capacity. “The excess capacity added to [China’s steel production] annually is more than the entire production of Japan, the second largest steel producer,” Haley said.

China produces about half of the world’s total supply. Beyond domestic use, that means massive exports and the chance of the metal entering the U.S. through other countries even if not directly because of imports from other sources.

—Despite world events, the oil market is surprisingly calm

—Why is Donald Trump threatening Huawei? Because he’s without options

—Grindr, the popular dating app, has been declared a national security risk

Follow Fortune on Flipboard for the latest news and analysis.