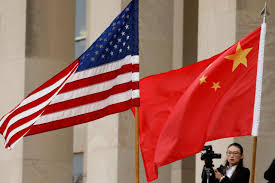 Plenty of people complain about being over-taxed. Now they have another legitimate gripe: being over-tariffed.

For all the talk of tariffs on Chinese goods going into effect Friday, consumers are actually dealing with a triple threat. Indeed, relationships with the country’s biggest trade partners by far—Canada and Mexico—are sitting in limbo, even with NAFTA replacement USMCA (US-Mexico-Canada Agreement) having been signed in October 2018. That leaves a sticky problem that either gets solved soon or which may sit around well into a presidential election year.

The Trump administration originally imposed 25% steel and 10% aluminum tariffs on metals coming in from Canada and Mexico to pressure for changes on NAFTA. But though a new agreement has been signed, the U.S. has yet to remove its tariffs and, in response, neither have the neighbors to the north and south. The center-right American Action Forum has estimated that tariffs applied to imports from Mexico and Canada would cost consumers $ 2.7 billion a year, and that doesn’t count the loss in business U.S. exporters see from retaliatory tariffs. And while the tariffs are in place, none of the three NAFTA countries will ratify the USMCA, which could mean longer-term expenses.

Canada and Mexico are both bigger American export markets than China. In 2018, the U.S. sold $ 298.7 billion in goods and service into Canada, while Mexico took $ 265 billion, according to data from the Census Bureau. China bought $ 120.3 billion.

When it comes to imports into the U.S., China sent $ 539.5 billion last year. Imports from Canada were $ 318.5 billion and from Mexico, $ 346.5 billion. Take North America as a whole, and the combination of trade with Canada and Mexico dwarf that of China.

Some of the big categories of trade are automobiles, electronics, oil and gas, manufacturing equipment, steel, and aluminum, according to Ram Ramasamy, and industry director for Frost & Sullivan. Canada is also the largest oil exporter to the U.S. Higher prices for such a large volume of imports mean the “cost of production will go up,” according to Ramasamy, and what consumers ultimately pay.

“What companies have done is pass this onto consumers,” said Usha Haley, a professor of management at Wichita State University and director of the school’s Center for International Business Advancement. She pointed to increased tariffs on washing machines but not on dryers. “Although washing machines have gone up in price, there is no need for dryers to go up in price,” Haley said. But manufacturers have raised prices on both.

The big numbers, and the product categories, are a direct result of the original NAFTA, which was supposed to encourage trade among the three countries. But the original agreement has aged and it had many critics, particularly among workers who blamed the pact for companies moving manufacturing jobs to Mexico. President Trump focused on NAFTA during the 2016 election, calling it the “worst trade deal” the U.S. had ever entered.

Although claiming he would abandon NAFTA, Trump instead opted to keep much of it in place in the new USMCA. He did set higher tariffs on some key imports, like steel and aluminum, framed as a national security issue but perceived as pressure for a new agreement. After some contentious negotiations, all three countries agreed to the new framework and signed the deal.

“Everyone thought the tariffs would be dropped in the lead-up to the signing,” said Jessica Wasserman, a partner at law firm Greenspoon Marder and long-time trade attorney who has also held senior positions in the Department of Commerce and the Department of Agriculture. But they weren’t, either before or after pens came off the paper. “Now we’re back to the mumbling that we’re not going to ratify it.”

There may not seem to have been an immediate impact beyond the increased prices, but Wasserman argues that there has already been a business impact because of the uncertainty. “I think it really has messed with investment decisions,” she said. “I have some clients that have been affected.” One, a cheese producer, ultimately opened additional facilities in Canada rather than expand U.S. operations.

The impact on businesses and on labor groups has translated into tensions on Capitol Hill. Because the new agreement is not technically a treaty, both the House and the Senate would have to support it, meaning that Trump has to come to terms with Nancy Pelosi.

“That’s the negotiation that matters right now,” said Tim Keeler, an international trade partner at law firm Mayer Brown and former U.S. Trade Representative chief of staff. “To me, everything else is a sideshow.” Democrats have issues with labor and environmental issues in the agreement, wanting tighter controls on Mexico, and pharmaceutical intellectual property, because they ultimately want cheaper drug price availability from Canada.

Should Trump and Pelosi not come to an agreement, there would be two possible outcomes. Either NAFTA would continue to be the governing deal or Trump could pull the U.S. out entirely and rely on World Trade Organization.

“If there is a strategy, I have yet to see it or figure it out,” said Peter Bible, chief risk officer at accounting firm EisnerAmper. “We’re telling people to stay the course. It’s too soon to talk about relocation or reconfiguration of operations.”

And if the issue isn’t resolved in the U.S. by August, “it won’t get ratified until at least 2020” because of the U.S. presidential election, Haley said.

Consumers and businesses may be forced to wait for politicians to get something done. The real question: Will the economy be as patient?