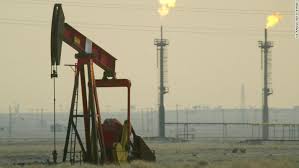 Oil prices fell on Wednesday after a report allayed concerns about tightening supply, ending a rally that took prices to their highest since early November on concerns that OPEC output cuts and sanctions would take too much oil out of the market.

The International Energy Agency (IEA), a watchdog for oil consuming countries, said in a statement on Tuesday that markets are “adequately supplied” and that “global spare production capacity remains at comfortable levels.”

Brent crude futures were at $ 74.18 per barrel at 0848 GMT, down 33 cents from their last close. It was the benchmark’s first fall after three days of rises, but it is still set for its fifth consecutive weekly gain.

U.S. West Texas Intermediate (WTI) crude futures were at $ 65.89 per barrel, down 41 cents from their previous settlement – not enough to steer them away from what is set to be their eighth week of gains.

Crude oil prices for spot delivery rallied after the United States said on Monday it would end all exemptions for sanctions against Iran, demanding countries halt oil imports from Tehran from May or face punitive action from Washington.

The spot price surge has put the Brent forward curve into steep backwardation, in which prices for later delivery are cheaper than for prompt dispatch.

The United States has said it saw Saudi Arabia as a partner to balance oil markets.

“The (Saudi) kingdom will be relied upon to work with other producers to keep markets adequately supplied,” PVM said in a note.

But some analysts say the market was still fundamentally bullish.

“The factors that could lead to higher prices are overwhelming,” said Carsten Fritsch at Commerzbank, adding a push towards $ 80 a barrel was more likely than a fall below $ 70.

Saudi Energy Minister Khalid al-Falih said on Wednesday its production in May will not vary greatly from previous months.

He added that Saudi Arabia will aim to stick to its output quota fixed in a deal by the Organization of the Petroleum Exporting Countries (OPEC), Russia and others, but that June numbers will be determined in a couple of weeks depending on customers’ needs.