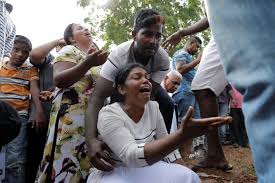 Sri Lankans wept and prayed on Tuesday as they buried their dead from suicide bomb attacks on churches holding Easter services and luxury hotels that killed 321 people in the country’s worst violence in a decade.

More than 1,000 mourners attended a memorial service at St. Sebastian church in the coastal city of Negombo, just north of the capital, Colombo, where more than 100 parishioners were killed as they worshipped on Sunday morning.

The ceremony began with prayers and singing under a tent put up in the courtyard of the church, which had most of its roof torn away by the blast.

Pall-bearers wearing white carried in wooden coffins one by one, followed by distraught relatives. They gathered around the coffins, crying and comforting each other. Some needed help after they were overcome by grief and the heat.

Cardinal Malcolm Ranjith, the archbishop of Sri Lanka who led the service, urged other churches to delay memorials amid fears that more bombers may be at large.

“The security forces have not cleared the situation yet … there could be more attacks on public gatherings,” he told reporters after the service.

Islamic State claimed responsibility for the coordinated attacks on three churches and three luxury hotels. The bombings were retaliation for attacks on mosques in New Zealand, a Sri Lankan official said.

Most of the 321 dead and 500 wounded were Sri Lankans, although government officials said 38 foreigners were killed.

After the service at St. Sebastian, 22 coffins were taken to a freshly dug burial site near the church. Onlookers watched the procession along with police and soldiers.

The coffins were lowered into individual graves. Among them was Vivian Irangani, 67, who had been dropped off at church on Sunday by her Buddhist husband.

“She was a kind-hearted woman who did not do wrong to anyone,” said family member Supitha Weramunda.

Some of Irangani’s six grandchildren placed white chrysanthemums on her grave, followed by her sobbing widower.

“We are all shell shocked. Everyone is afraid for their lives, afraid that after so many years of peace the ghosts of the past will come back,” Weramunda said.

The bombs shattered a relative calm in the Buddhist-majority Indian Ocean island since a civil war fought by mostly Hindu, ethnic Tamil separatists ended 10 years ago, and raised fears of a return to sectarian violence.

Sri Lanka’s 22 million people include minority Muslims, Hindus and Christians. The latter have largely avoided the worst of the island’s conflict and communal tensions.

A senior Buddhist leader who attended the St. Sebastian service appealed for unity.

“Buddhism is about love and compassion, so is Catholicism. The roots are the same. I have come in this spirit,” said Chief Incumbent of the Dharmayathanaya Temple, Venerable Elle Gunawansa Thero.

“In this country we are branches of the same river, of the same tree. We have to stick together,” he said.