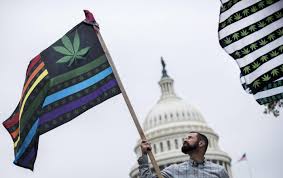 These are high times for the American cannabis industry. Recreational marijuana is now legalized in 10 states and the District of Columbia, and myriad products containing non-psychoactive cannabidiol (CBD)—think CBD-infused skin creams, protein bars and kombucha—have found their way to storefronts across the nation.

But when it comes to receiving the kind of banking services that most businesses take for granted, pot-related business continue to find themselves cast adrift from the mainstream. The fact that marijuana remains a Schedule I drug under U.S. law means that most banks continue to be wary of financing the cannabis industry, lest they fall afoul of federal regulations.

The result has been a fledgling, growing industry that remains handcuffed when it comes to accessing everything from business loans to payroll services to electronic payment methods (including credit cards, which aren’t accepted at most dispensaries). Not only does this apply to companies who directly “touch the plant” but also ancillary businesses indirectly associated with the industry, who risk being cut off by their banks for receiving cannabis-related revenue.

“There’s a real aversion by the financial services industry in taking any risk at all in this space—whether it’s traditional bank accounts, merchant services, even insurance” says Brian Baum, CEO of CBD product company Cannovia. He recalls the Colorado-based company’s difficult process in finding a directors and officers (D&O) liability insurance carrier; of the 23 different insurers Cannovia applied to, “21 declined to even bid on the policy.”

In lieu of major national banks and financial institutions, some cannabis businesses have resorted to state-chartered credit unions willing to serve them in states where various uses of marijuana are now legal. Otherwise, many companies find themselves having to operate as cash businesses sitting on large quantities of paper money—a situation that obviously comes with its share of safety risks and inconveniences.

But a pair of bills currently working their way through Congress promise to alleviate the situation, potentially opening the doors for financial institutions to provide cannabis companies with much-needed banking services.

Six years after it was first introduced, the most recent iteration of the Secure And Fair Enforcement (SAFE) Banking Act was approved last month by the House Financial Services Committee and, having secured widespread bipartisan support, appears poised for a floor vote by the House of Representatives. Both the House bill and a companion bill introduced in the Senate this week seek to provide a “safe harbor” for financial institutions working with cannabis-related businesses in states where they’re legal—protecting them from federal prosecution for accepting proceeds from transactions involving a federally prohibited, scheduled substance. The measure has already drawn support from the likes of Treasury Secretary Steven Mnuchin.

Meanwhile, the recently reintroduced Strengthening the Tenth Amendment Through Entrusting States Act, better known as the STATES Act, tries to address the same problem from a different angle. That bill, which has also gained significant bipartisan support, would amend the Controlled Substances Act (CSA) of 1970—which designated marijuana as a Schedule I substance—to restrict federal enforcement of the CSA against individuals and companies in states where cannabis is legal.

Speaking before a Senate subcommittee last week, Attorney General William Barr indicated that he would support such a measure allowing states to “make their own decisions”—noting that he would prefer “the approach taken by the STATES Act than where we currently are.”

Of course, neither bill does what most cannabis industry observers and participants would like to see: that is, lift the federal prohibition on marijuana as a Schedule I controlled substance. (Two Democratic presidential candidates, Sen. Cory Booker and Rep. Tulsi Gabbard, have each floated their own bills this year that would look to do just that.) But both measures promise to bring relief to a situation that has hindered the ability of legitimate cannabis businesses to operate, by providing legal clarity to financial institutions concerned about falling afoul of federal regulations.

“With the overhang of federal prohibition, banks are wary—not wary about cannabis, they’re wary about prohibition,” according to AmeriCann CEO Tim Keogh, whose company owns and operates marijuana cultivation and processing facilities. “We talk to traditional bankers and they’re not against cannabis…it’s the conflict between state and federal regulations [that keeps them away].”

So far, the banking industry has expressed enthusiasm for this regulatory push on Capitol Hill. The American Bankers Association (ABA) has written letters to lawmakers throwing the industry group’s support behind both the SAFE Banking and STATES acts. ABA president and CEO Rob Nichols greeted the news of the SAFE Banking Act’s passage through the House Financial Services Committee last month as “an important step forward in providing regulatory and legal clarity for financial institutions caught in the conflict between state and federal cannabis laws.”

But not everyone associated with the cannabis industry is bullish on the proposed legislation’s chances of making it through Congress, nor its effectiveness should it be passed into law. FINCANN CEO Nathaniel Gurien, whose firm acts as an intermediary in arranging financial services for cannabis companies, says he thinks the SAFE Banking Act “probably has a less than even chance of passing this year—which means it has no chance next year as things heat up politically” in advance of the 2020 elections.

In addition, Gurien argues, the law won’t dispel the stigma that the conservative-leaning, risk-minded boards of many financial institutions have toward the topic of marijuana. The only measure that could prompt such a shift in thinking, he says, is “de-scheduling cannabis as a Schedule I drug.”

Josh Schneiderman, an attorney at Los Angeles-based law firm Snell & Wilmer who advises clients in the cannabis industry, also notes that there are still numerous gray areas that the current iteration of the SAFE Banking bill does not address—such as whether banks would be in a position to foreclose on certain types of collateral if they don’t have a license to operate a marijuana-related business such as a dispensary.

And absent any federal rescheduling of marijuana, U.S.-based cannabis companies still won’t be able to tap the public capital markets like some of their foreign-based counterparts—such as Canada-based Tilray, which became the first cannabis company to make an initial public offering on a U.S. stock exchange after its $ 153 million IPO last July.

Still, the legislation will almost certainly be a step in the right direction for an industry currently choked off from the most basic of financial services. As Schneiderman notes, “Most of my clients these days don’t have a bank account.”

Should they succeed in gaining access to those kinds of services, American cannabis companies could get to a higher place than ever before.