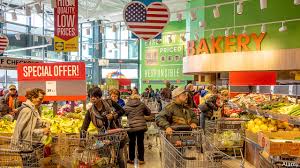 Why is inflation in America so low?

ALMOST TEN years into the recovery from the financial crisis, American monetary-policymakers are still finding that inflation is strangely quiescent. Every time price pressures seem to build, they then dissipate. The latest peak was in July 2018. Inflation as measured by the personal consumption expenditure (PCE) index, which the Federal Reserve tries to pin at 2%, was at 2.4%, and, in a rare heated moment—by the standards of the past decade—consumer-price inflation hit 2.9%. But since then, even as unemployment has stayed low, both measures have sagged to below 2% once again.

The absence of stronger inflationary pressure has been a little bruising for the Fed. It has long predicted that upward price pressures would result from the economy—and in particular, the labour market—pushing against its natural limits. In preparation for that event, it has raised interest rates nine times since December 2015. Along the way it has explained dips in inflation as temporary. But self-doubt has grown all the while. Weakness in inflation is one reason that rate rises are on hold today, with Jerome Powell, the Fed’s chair, emphasising the need for patience.

Inflation is notoriously noisy, and therefore tricky to forecast. Energy prices, which are volatile, are responsible for much of the fall since last July. Core PCE inflation, which strips out food and energy, also rose in mid-2018—to 2%, exactly where the Fed wants it. But its subsequent fall has been small: a tenth of a percentage point between July and December.

The risk is that this trend, though gentle, proves to be persistent. Figures for January were due to be released on March 29th, after The Economist went to press. The Cleveland Fed estimates that they will show another slight fall.

Falling core inflation can suggest a weakening economy. But only some components of inflation are procyclical. Restaurant meals, furniture and housing all seem to get pricier more quickly in booms. Other prices—like those of health care, financial services, clothes and transport—seem to follow their own tune. The increase in core PCE inflation in the first half of 2018 was mainly driven by such “acyclical” prices, according to an analysis by Adam Shapiro of the San Francisco Fed. Around half of the rise was caused by changes in prices of mobile-phone contracts and heftier charges and fees for financial services, a category that includes levies on credit-cards and cash machines.

What goes up can come down. A similar exercise by Gregory Daco of Oxford Economics, a consultancy, finds that the fall in core inflation since mid-2018 also reflects the acyclical part of the inflation mix. The cyclical component of inflation, meanwhile, has not much changed. It remains 0.7 percentage points below the average for 2004-07 (see chart). Amid signs of a slowdown in economic growth, there are even some indications that this component could be weakening. Rental costs for housing (including imputed rents) have shown some signs of moderating, for example, having previously been galloping upwards.

In combination, these pieces of research suggest that underlying inflationary pressure did not subside in the second half of 2018, because it was never there in the first place. But that poses a bigger puzzle: why has the cyclical component of inflation been so muted, given the apparent strength of America’s labour market? That is the question for economists to tackle—ideally before it becomes moot.