With Nasdaq entering record territory in the midst of a barrage of Tech sector earnings, it would seem that market participants are very happy with what they see on the earnings front. The market’s enthusiastic reception to Thursday’s reports from Google (GOOGL – Analyst Report), Microsoft (MSFT – Analyst Report) and Amazon(AMZN – Analyst Report) can certainly be interpreted that way. In fact, the Tech sector has one of the best stock-price response to Q1 earnings announcements – the 5th best among the 16 Zacks sectors in the S&P 500 index.

This begs the question whether Tech sector earnings really are that good, particularly given the emerging narrative of an overall challenged earnings backdrop.

My Take on the Amazon, Google and Microsoft Reports

Let me quickly give you my take on Thursday’s big Tech reports, before going into detail about how this earnings season is unfolding for the sector as a whole.

The Amazon report truly stands out for good reasons, particularly following management’s decision to provide some color on their cloud business. Amazon beat on the top- and bottom-lines, though didn’t make any money in the quarter. But you don’t buy Amazon shares because of their profitability – you do it for consistent growth. And it’s on the growth front that the fresh details about the company’s cloud business are so reassuring. We don’t know everything about Amazon’s cloud business at this stage, but we do know shows that it has a leg up on other cloud operators like Google, IBM and Microsoft.

While the Microsoft report did have some encouraging signs, likely indicating that the new management team was doing a better job repositioning the company for the times ahead , but I find it hard to get excited about the Google report. They missed on both the top- and bottom-lines, with aggregate paid clicks down from the preceding year. They did do a better job on the expense side and on investments, which helped margins, overall profitability and cash flows. But the best one could say about their report is that it could have been worse.

So why are investors so happy with these and other Tech sector earnings reports?

The most logical explanation seems to be that expectations had been so beaten down that investors end up cheering when the reality turns out to be simply “less bad.” We saw this behavior in play earlier in the reporting cycle with the market’s positive reception to otherwise mediocre reports from Intel (INTC – Analyst Report), IBM (IBM – Analyst Report) and others.

The Tech Sector’s Q1 Scorecard (as of Friday, April 24th)

We now have Q1 results from 27 Tech sector companies in the S&P 500 (out of 62 total in the index) that combined account for 59.1% of the sector’s total market cap in index. Total earnings for these 27 Tech companies are down -2.7% from the same period last year on +1.7% higher revenues, with positive surprises running at a below-average 46.4% for earnings and a decent-enough 50% for revenues.

Any way you look at it, this is weaker performance than we have seen from the same group of 27 Tech companies in other recent periods.

As you can see in the comparison charts above for these 27 Tech companies, neither the Q1 growth rates (left hand side chart) nor the ratio of companies beating earnings and revenue estimates compare favorably to what we have seen from the same group of companies in other recent periods.

We divide the Technology sector into 7 industries at the medium-classification level. The table shows the sector’s Q1 scorecard at the M-industry level.

Please note that the Computer & Office Equipment industry is the largest earnings contributor to the sector, bringing in roughly 45% of its total earnings last year. The chart below shows the relative earnings contributions of the sector’s constituent industries in 2014. Keep in mind that Apple’s placement in the ‘Computer & Office Equipment’ industry gives it most of its earnings heft. 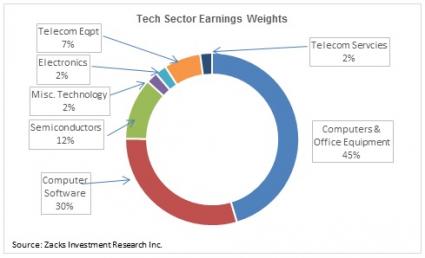 The composite (or blended) growth rate for the Tech sector, where we combine the actual results from the 27 sector companies that have reported with estimates for the still-to-come 36 players, is for total earnings growth of +4% on +4.4% higher revenues. Estimates for Apple (AAPL – Analyst Report), which reports after the close on Monday, are responsible for pushing the overall earnings growth for the sector into positive territory.

In 2015 Q2, the sector’s total earnings are currently expected to be down -1.5% on +7.3% higher revenues, with estimates starting to come down in a meaningful way. The chart below shows the evolution of Q2 earnings growth estimates since early January. As you can see, the -1.5% decline in Tech sector’s Q2 earnings is down from +6.1% growth in early January. 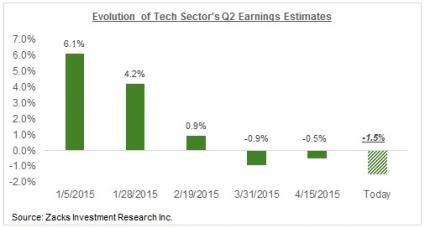 Bottom line, the sector’s earnings picture seems out of sync with how their stock prices are behaving at present. But as we all know, stocks can, and many times do, go out of sync with earnings fundamentals every now and then.

Note: Want more articles from this author? Scroll up to the top of this article and click the FOLLOW AUTHOR button to get an email each time a new article is published.