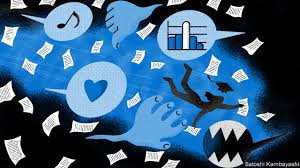 A dispiriting survey of women’s lot in university economics

“WHY IS THIS an interesting question?” Éva Nagypál, then a junior economist presenting research at her first academic conference, had barely finished her opening sentence. She still remembers the interruption many years on. Later she came to learn that such rudeness was quite normal, and that economists were capable of worse. As a young woman, she also experienced some “inappropriate” behaviour, but brushed it off. “I could handle it,” she says. Being told she was “technically good, but not very creative” was harder to stomach. She left academic economics in 2009.

Economists have tended to be wary of reading too much into anecdotes like Ms Nagypál’s. A single data point does not prove that women are picked on or pushed away. Even Ms Nagypál’s departure from academia was complicated. She liked her colleagues at Northwestern University, but felt drawn to more collaborative, policy-relevant research. The pull of her family was also a factor.

But harder evidence of something amiss is building. Granted, more women are attaining senior positions in university economics. But women make up only around 30% of PhD students, and are likelier than men to drop away as they climb the career ladder. Among a group of 43 leading American universities, the female share of PhD students has been essentially flat for two decades (see chart 1). That of assistant professors has fallen since 2009. Progress seems to have been a little slower than in some natural sciences, and economics remains far behind other social sciences.

Quantifying the effects of such fuzzy notions as behaviour and culture is hard. But the American Economics Association (AEA), the leading professional body for academic economists, has attempted to do just that. On March 18th the AEA published the findings of a survey of its members, examining the “professional climate”. The survey reveals many more data points than one, and finds plenty of evidence of harassment and discrimination.

More than 9,000 economists, or 20% of those eligible, completed the survey. Only two-fifths of respondents reported that they felt “valued within…economics”. But women and non-whites tended to feel worst. They were more likely to report unfair treatment when seeking an academic job and in pay and promotion. Almost half of women reported experiencing discrimination based on their sex. Among non-whites of both sexes, 29% complained of discrimination on the basis of ethnicity.

It is possible that the sample is biased, pushing up the apparent frequency of discrimination. The disgruntled may have been especially keen to have their say. Against that, the survey may have struggled to reach those who had been so discouraged by their experience that they had left the profession altogether.

In any case, the survey yielded more than enough reports of sexual harassment. Nearly 2,000 respondents said they had been embarrassed or offended by inappropriate gestures, remarks or materials from other economists. Hundreds reported experiences of attempted or actual sexual assault by a colleague or student in the past ten years. And 267 reported that they would have been rewarded had they co-operated with unwanted sexual attention, or threatened with retaliation had they not.

These figures are still fairly raw. Later this year the AEA will release further analysis, for example comparing the results with surveys from other academic disciplines. However economics measures up, abuses of power are probably widespread. A meta-analysis of studies of the prevalence of sexual harassment in 2003 ranked academia second only to the armed forces.

The Economist has supplemented the AEA’s survey by interviewing 30 members of the profession, some speaking on condition of anonymity, to understand where and why problems exist. Most were women and at highly regarded universities. Most had tenure. Most reported that their colleagues were kind and that they enjoyed academic life. But their experiences varied widely. And all of them said that the profession had its problems.

One reported receiving too many comments on her appearance. Another said a fellow graduate student had been stalked. Some spoke of a set of senior men who were notorious sources of unwanted attention after a few drinks. Others mentioned an academic who had been edged out of a university department after several complaints against him, including some by graduate students, of unwanted sexual advances. He was then promoted at a different university.

Our interviewees found it much easier to name prominent bullies than notorious harassers. A senior professor said that she had seen a special nastiness reserved for people regarded as vulnerable, including women. Others claimed only to have seen “assholes” who were indiscriminate in their aggression.

Uncovering and fixing such faults is difficult. Like any profession, economics is hierarchical. As in other academic disciplines, success depends on peer review. A formal complaint against someone higher up the ladder invites retaliation. Your research may be trashed. Your chances of promotion may be blighted. If the perpetrator is at a different university, you may not even know who to complain to.

The potential for abuse of power starts early. There is a growing trend for young economists to work as research assistants to leading academics, as a pathway into prestigious PhD programmes. If the academic refuses to write them a good reference, their career may be over before it even starts. PhD students are just as reliant on their seniors. Success requires letters of recommendation, invitations to conferences, help with research ideas and perhaps joint research. In all these areas women were far likelier to report unfair treatment than men in the AEA’s survey (see chart 2). Non-whites were also more likely to report it than whites.

Unfair treatment can be unwitting. Senior professors may be unconsciously drawn to favour students who look like their younger selves. They may like chatting about work over a drink, which young women may find uncomfortable. One PhD student said she felt that female students found it harder to connect with male professors. She suspected that was partly due to unspoken worries about harassment.

On the job market, too, interviewees detected implicit bias. One senior woman recalled hearing statements such as “Her paper is really good—she works really hard” alongside those like “His paper is OK but he’s super-smart.” Writers of recommendation letters may not take into account time off for child-rearing. Women may be held to higher standards in evaluations of their research. Two recent studies by Erin Hengel of the University of Liverpool found that their papers are more readable than those written by men and cited more often, suggesting a higher hurdle for publication. Heather Sarsons of the University of Toronto has found that women get a smaller boost than men in their chances of tenure from each paper they co-write.

Then there is the style of seminars, for which economics is notorious. Interruptions and intense questioning are supposed to weed out errors and uncover sloppy thinking. And several interviewees told of supportive sub-fields and departments, where the primary purpose was not to tear down the speaker. But one said she felt like quitting after seeing how a female presenter was treated. Another economist reported being asked during a presentation whether she knew any economics, and being interrupted incessantly.

Even if everyone gets the same treatment, minority groups (which in economics includes women) may find such an environment unpleasant. The PhD students we spoke to said they were put off by the seminar style. Among macroeconomists, whose field is both particularly short of women and infamous for bare-knuckled seminars, 40% of those responding to the AEA’s survey felt “disrespected”; among female macroeconomists, 70% did.

Change will be slow. Assessments of young economists’ potential will always be subjective to a degree. Some senior economists shudder, with justification, at the thought of sitting through a sloppy seminar in silence, and worry that a cuddlier environment will soften intellectual rigour.

But experimentation is happening. Some departments have begun to try different seminar styles, for example insisting that presenters should be allowed a minimum time to speak before being interrupted. Some have circulated reminders that people should raise a hand before asking a question, or be mindful of the time they are taking as they make their point.

Ideas are circulating about ways to attract and support junior and female researchers. The most recent issue of the Journal of Economic Perspectives contained a collection of papers on the determinants of women’s success in PhD programmes and ways to “make economics work for women at every stage”. One, by Leah Boustan and Andrew Langan of Princeton University, found that departments with better outcomes for junior women also hired more female faculty members, provided “collegial” research seminars and were more aware of gender issues.

Another paper by Mr Langan, covering accounting, sociology and political science as well as economics, found that when women become department chairs, the female share of graduate students goes up with no deterioration in candidates’ quality. Women in those departments also publish more papers and are likelier to get tenure. The difference may lie in female heads of department sharing out non-academic duties more fairly. Over 40% of the women in the AEA’s survey reported being given a disproportionate load.

Young economists are also speaking out. Last year the New York Times reported that Roland Fryer, a prominent economist at Harvard, had been found by the university to have created a hostile work environment for research assistants in his laboratory, which he denies. After Mr Fryer resigned from the AEA’s executive committee last December, several hundred research assistants and graduate students from dozens of universities signed an open letter in Medium, an online magazine, pointing out that bad behaviour was “too often an open secret among graduate students and junior faculty”.

Some have accused economists of being slow to tackle discrimination in their profession because of their conviction that market forces would drive it out. “It was more like benign neglect,” says Ben Bernanke, a former head of the Federal Reserve and the AEA’s president. “Nobody said we should prevent women from becoming economists. But there weren’t a lot of people saying we should take affirmative steps to make it more accessible to a broader range of people.”

Now the AEA is taking action. Mr Bernanke, Olivier Blanchard (his predecessor as president) and Janet Yellen (his successor and another ex-head of the Fed) announced several measures with the survey’s findings. The AEA will pay for an ombudsman to hear and record complaints about harassment and discrimination, and to provide advice. Members will vote on proposals to add teeth to an expanded code of conduct. Penalties for misbehaviour include ejection from the AEA’s activities, termination of membership and a notification to an offender’s employer. Retaliation against anyone filing a complaint can also invite disciplinary action.

This amounts to recognising that although economists may like to believe that their profession is a meritocracy, in which the best rise to the top, the reality is much murkier. As things stand, good work may be crushed along with the bad. And change would, if nothing else, make many economists happier. Ms Nagypál cannot say whether she would have stayed in a more supportive environment. But she knows that “it would have been nice to try.”