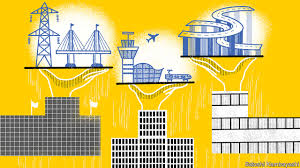 National development banks are back in vogue

TONY OKPANACHI could be a dealmaker in the City of London or on Wall Street. Smart tie, winning smile, he recounts his 28-year career as a high-flying financier, from his MBA to his last private-sector job as an executive at Ecobank, a pan-African lender. He says profits are important and dismisses handouts to small businesses as “government largesse”. Yet appearances can deceive. “I’m an economist by training, and a commercial banker by profession,” he says. “Now I’m a development banker.”

Mr Okpanachi is the boss of Development Bank of Nigeria (DBN), a wholesale lender to small firms that started operating in 2017. His institution is part of a proliferation of national development banks (NDBs) worldwide. Kevin Gallagher, of Boston University, and Rogerio Studart, of the Federal University of Rio de Janeiro, believe there are more than 250, with total assets of $ 4.9trn, four times those of multilateral peers. Poor countries account for over three-quarters of the tally, but NDBs are also popular in the rich world. France and Canada have recently opened three between them. Myanmar and Ghana are rolling out new ones. Britain unusually, has no NDB—but some politicians want one.

NDBs are a unique species. Generally state-owned, they lend in pursuit of missions set out by the government. They cater to those often neglected by commercial bankers, lending to small firms, farmers or exporters, or funding infrastructure projects. Many banks, such as Mr Okpanachi’s, seek to marry purpose with profitability. But achieving this in practice is not easy.

The revival of NDBs follows decades of decline. After the second world war, states enlisted them to fund reconstruction (eg, Germany’s KfW) or to aid industrialisation (Brazil’s BNDES). But they soon found themselves at the centre of ideological battles. Proponents of state intervention saw them as plugging financing gaps. Opponents thought they distorted markets. As the free-market “Washington Consensus” gained ground in the 1980s, many banks shrank or were privatised.

It took a global financial crisis in 2007-08 for the pendulum to swing back—and stop in the middle. “We’ve moved on from the cold war discourse of states v markets,” says Mr Studart. Policymakers now favour NDBs for their counter-cyclical role. In 2007-09 their combined loan portfolio increased by 36%, over three times faster than private peers. Their resilience reflects stable funding. Few rely on deposits, and state guarantees allow many to access markets cheaply.

Even more popular is their role in funding infrastructure, which promises productivity gains. Colombia used one to spend billions on a 8,000km road programme. France’s Banque Publique d’Investissement channelled $ 12bn in equity and debt to 4,000 startups in 2017.

The revamped model is winning support from both statist types, who enjoy regaining control over industrial policy, and liberals, who like funding entrepreneurs without pulling fiscal levers. It helps that NDBS form a broad church. A few are huge: China Development Bank manages $ 2.4trn—half the global total. Some are big fish in small ponds: Bhutan Development Bank runs a quarter of the Himalayan kingdom’s banking system. Half of NDBS target certain sectors; the rest have wider mandates. Their tastes for direct or wholesale lending also vary.

What unites modern NDBS is a desire to solve market failures—in a market-friendly way. To do so they strive to adopt the best habits of their commercial peers. Many have become more professionally run. They try to keep teams lean and be profitable. They seek financial independence from their political patrons. Just a quarter receive regular budget transfers. Instead many rely on cheap loans from multilateral institutions and rich countries. Most also tap international debt markets.

But few NDBS manage to escape gravity. Lending where others fear to tread is tricky. Assessing the riskiness of tiny firms, lengthy projects or new technologies requires skilled staff and sophisticated systems. Many NDBS lack these. They also seek to lend at affordable rates, so often underprice risk. Despite their cheap funding most have low profitability. Many have non-performing loan ratios above the national average. Some, like El Salvador’s Bandesal or Uganda Development Bank, see borrowers default on over a third of loans.

Government funding guarantees are therefore key to their viability. That makes it essential that their operational independence is enshrined in strong governance. But that is not often so. Government appointees dominate boards. Mandates are loosely defined, leaving the allocation of funds vulnerable to influence by officials or private interests. Brazil offers a cautionary tale. BNDES used state subsidies to turbocharge lending, and its loan portfolio reached 10% of GDP in 2011. Much of it went into either “the pockets of shareholders” of recipient companies or “bad projects”, says Vinicius Carrasco, a former director. Inflation soared and a punitive rise in interest rates followed. Mr Carrasco was part of the team that oversaw a U-turn in 2016.

A final compromise is the idea that NDBS’ jobs ought to be temporary. “The best success of a KfW programme is when it’s not necessary any more,” says Jörg Zeuner of the German development bank. The hope is that, as sectors and countries develop, NDBS use less direct forms of finance, such as guarantees, to “crowd in” commercial lenders—and then quietly move on. KfW has done this since 1948. But many NDBS lack the data or the framework to assess genuine progress. And some struggle to find relevant employment once their first job is done. If too many become solutions in search of a problem, the truce underpinning their revival could fray.