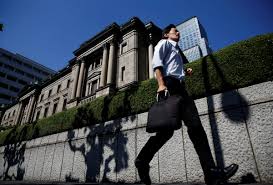 The Bank of Japan cut its inflation forecasts on Wednesday but maintained its massive stimulus program, with Governor Haruhiko Kuroda warning of growing risks to the economy from trade protectionism and faltering global demand.

Rising pressure from the trade war between China and the United States — Japan’s biggest trading partners — is adding to strains on the world’s third-largest economy and undermining years of efforts by policymakers to foster durable growth.

Data earlier in the day showed Japan’s exports in December fell the most in two years.

“To be honest, if U.S.-China trade tensions are drawn out, there will be a serious risk to the global economy – first to the two countries’ own economies,” Kuroda told a news conference after the end of the two-day policy review.

“For now, that possibility is slim, and I hope they will resolve this soon.”

As expected, the BOJ trimmed its inflation forecasts, reinforcing views that it will have to stick with its unprecedented economic support for some time to come.

But despite rising risks such as trade disputes and Brexit, the central bank also maintained its view that Japan’s economy will continue to expand at a modest pace.

However, a recent Reuters poll of economists showed external factors have increased the chances of Japan sliding into a recession in the fiscal year starting in April, making it even harder for the BOJ to reach its elusive 2 percent inflation target.

China on Monday reported its slowest growth in nearly three decades and it is expected to lose more steam in coming months. The International Monetary Fund (IMF) trimmed its global growth forecasts and a survey showed increasing pessimism among business chiefs amid the trade tensions.

“Such downside risks concerning overseas economies are likely to be heightening recently, and it also is necessary to pay close attention to their impact on firms’ and households’ sentiment in Japan,” the BOJ said in a quarterly outlook report released along with the policy decision.

The BOJ reiterated a pledge to continue buying Japanese government bonds and left its short-term interest rate target unchanged at minus 0.1 percent. It also said it would keep guiding 10-year government bond yields around zero percent.

“It will be difficult for the BOJ to discuss policy normalization or an exit strategy for the moment as risks from global economies are rising,” said Hiroaki Mutou, chief economist at Tokai Tokyo Research Institute.

“The central bank will likely save easing measures for later and it will examine how the Fed policy movement will be and how it will likely impact the yen,” he said.

Concerns about a global slowdown and volatile financial markets have prompted the U.S. Federal Reserve to take a more cautious stance on future interest rate increases after four hikes last year, weighing on the dollar.

In its outlook report, the BOJ’s nine-member board cut its economic growth projections for the current fiscal year to March but raised its growth forecasts slightly for the fiscal years 2019 and 2020, with government spending expected to offset the pain of a planned sales tax hike this October.

The BOJ cut its forecast for core consumer inflation to 0.9 percent in the coming fiscal year from 1.4 percent, reflecting slumping oil prices. It was the fourth downward revision by the central bank to its inflation forecast for fiscal 2019 since it was first issued in April 2017.

That was still above a 0.7 percent forecast by analysts polled by Reuters.

Many economists believe the BOJ’s next move will be to start normalizing policy, with steps likely to include expanding its 10-year bond yield fluctuation from 0.2 percent and raising the 10-year yield target from around zero percent.

A majority expect that would happen in 2020 or later.

The BOJ’s radical stimulus program has had some unintended consequences, as years of low rates hurt financial institutions’ profits.

Many BOJ policymakers are wary of ramping up stimulus, though external shocks or a sudden spike in the yen could force the central bank to do just that if the economy is at risk of sliding into recession.