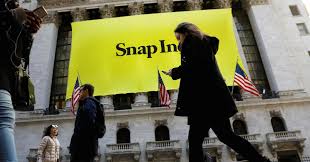 Snap’s stock fell nearly 9% in after-hours trading Tuesday after the camera and technology company said its chief financial officer resigned after only eight months on the job.

In a filing to the Securities and Exchange Commission late Tuesday, Snap said that its CFO Tim Stone “notified us of his intention to resign to pursue other opportunities. Mr. Stone has confirmed that this transition is not related to any disagreement with us on any matter relating to our accounting, strategy, management, operations, policies, regulatory matters, or practices (financial or otherwise).”

Such legal wording is significant because, short of the resignation of a CEO, a CFO departure is the biggest red flag for investors when it comes to executive departures. And Snap has had more than its share of executive-suite shuffling. Stone joined Snap as CFO only last May. Before that, he had spent 20 years at Amazon during its growth from a startup into a retail juggernaut.

Snap’s filing said that Stone’s last day “has not been determined,” suggesting the move was more sudden than the typically months-long transition that investors prefer when a financial chief is moving on.

On Twitter, Recode’s Kurt Wagner shared an internal memo that Snap shared with its workers regarding Stone’s resignation.

Also in the SEC filing, Snap sounded a more positive note about its earnings, which the company is expected to report on Feb. 5. Snap said it expects to report revenue and adjusted earnings before certain items “that are slightly favorable to the top end” of its guidance.