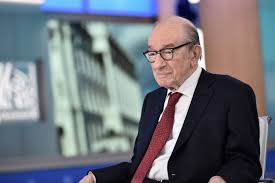 Alan Greenspan hasn’t run the Federal Reserve for a dozen years, but when he speaks, investors listen. His latest message is a concerning one: “Run for cover.”

Greenspan, at the Fed’s helm from 1987 to 2006 during the nation’s longest economic boom, said in a CNN interview he doesn’t expect equity prices to go any higher than they currently are and notes a big correction could be on the horizon.

“It would be very surprising to see it sort of stabilize here, and then take off,” Greenspan said. While markets could go up some, he added, “at the end of that run, run for cover.”

Greenspan’s comments come as Wall Street has lost its gains for 2018, with the S&P 500 hitting a new low on Monday. Currently, the stock market is posting its worst December performance since the Great Depression. Investors are especially concerned about rising interest rates, to which Greenspan pegged the recent volatility.

Greenspan warned that the U.S. could be on the verge of a period of “stagflation,” a state of high inflation, high unemployment, and stagnant demand in our economy. Americans haven’t experienced such an economic state since the late 1970s/early 1980s, which at the time included the worst recession since World War II.

“How long it lasts or how big it gets, it’s too soon to tell,” said Greenspan. “We’ll know it when we get on top of it.”