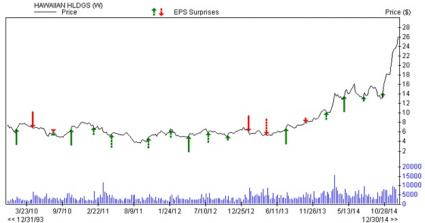 As we wash away 2014 and enter into 2015, investors need to look at areas where commodities, and other input costs are inexpensive, and for the first time in many years, the airline industry is getting a reprieve from high input costs.  Further, with the increased oil output volume from the U.S., it appears as though oil prices will be subdued for the near term.  Specifically, the most recent US oil inventory data posted just before the new year showed an increased supply in U.S crude stockpiles (rose 760,000 barrels), and saw stockpiles at the Cushing Oklahoma delivery point increase by 1.8 million barrels according to the American Petroleum Institute.

Typically, the winter season sees the largest decline in U.S. oil inventory due to the cold weather, and the most recent report stating that there is an oversupply has caused oil prices to drop once again. According to the Energy Information Administration’s (EIA) December Short-Term Energy Outlook, they “forecasts that Brent crude oil prices will average $ 68 per barrel (bbl) in 2015, with prices up to $ 5/bbl below the annual average early in the year.”  Further, the forecast for West Texas Intermediate (WTI) would average $ 63/bbl in 2015, according to the EIA.

If these average prices hold true, that would mean increasing margins, and declining costs for the airline industry throughout 2015.  Moreover, prices are expected to be lower in the first part of the year compared with the second part of the year.  Making the fourth quarter 2014, and the first quarter 2015 the time frame for this industry segment to see solid growth levels.

With all the positive news for the airline industry, Zacks has identified four companies that are best positioned to reap the gains in 2015.

Who to Look For

As you can see in the table below, Hawaiian Holdings has seen a massive uptick after their last strong earnings report.  This is not accounting for the massive oil price drop in Q4 2014.  Expectations are very high for Hawaiian’s Q4 earnings report.

Southwest Air (LUV – Analyst Report) a Zacks Rank #1 (Strong Buy) has met or beat their earnings and revenue expectations over the last 5 consecutive quarters, posting an average positive earnings surprise of 12.22%,and beating revenue expectations by more than $ 40 million  each quarter on average.

As you can see in the table below, Southwest Air’s last 5 positive earnings surprises have caused significant positive price appreciation.  According to Zack’s models, this trend is expected to continue in the first half of 2015. 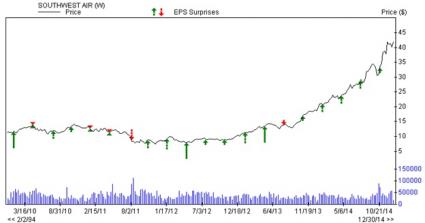 United Continental Holdings (UAL – Analyst Report) a Zacks Rank #1 has posted a positive earnings surprise over the last four consecutive quarters with an average positive surprise of 6.4%.  Further, United Continental has the most leverage to lower fuel prices amongst the airlines, and therefore should see the largest price appreciation relative to fuel prices over the near term.

As you can see in the table below, UAL has seen positive price appreciation after their last four earnings reports.  With oil continuing to decline, and airfare prices staying the same, profits are only increasing for this airline company. 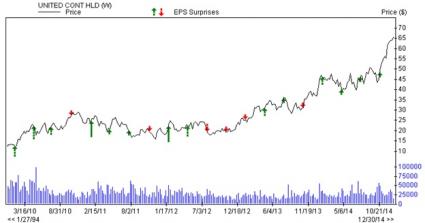 Delta Airlines (DAL – Analyst Report) a Zacks Rank # 1 has posted five consecutive quarters with positive revenue and earnings beats with an average four quarter positive earnings surprise of 4.91%.  Delta Airlines is the best of class for airlines going into 2015, and with ever declining oil prices the next two quarters look great for the company.

As you can see in the table below, Delta has seen significant price appreciation over the past several positive earnings, and is expected to rise even higher due to declining oil prices. 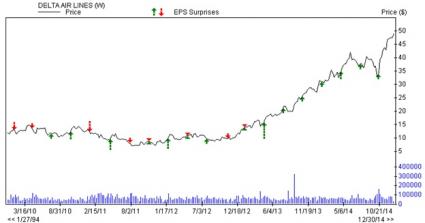 With oil prices declining, and no change in airline ticket prices, the airline industry is poised to reap a world wind of profits in Q4 0214, and Q1 2015 at a minimum.  The four mentioned airline stocks are the best positioned in the airline segment to see significant earnings and revenue growth over the next 1-3 months.