IU Explains P2P Lending: How to Secure Interest Rates as High as 24.90%

But if you’re tired, as I am, of these wimpy interest rates, you’ll be happy to hear about a new disruptive force in the online lending market.

It called peer-to-peer lending, and it’s your key to pocketing interest from loans that normally only banks and commercial lenders are privy to.

Peer-to-peer lending, also known as P2P or social lending, takes place on socially connected websites that allow consumers and businesses that are looking to borrow money at below-average interest rates to connect with real individuals that are willing to lend them that money. No bank required.

Most borrowers come to these sites for a range of purposes, including consolidating credit card debt, paying medical bills, home remodeling, educational expenses, business loans and even events such as weddings.

Some websites just function as middlemen, but many do a great job of sifting through the quality of potential borrowers to help manage default risk.

Loans normally consist of bundles of money provided by a number of lenders. This allows lenders, or what many sites call investors, to pool money together and spread their risk across many loans. Personal loans can range anywhere from $ 50 to $ 35,000. While business loans can go as high as $ 300,000. And that number is growing.

As you can imagine, peer-to-peer lending has taken off as it offers more transparent, efficient and consumer-friendly borrowing and lending.

Peer-to-peer sites operate at lower costs than traditional banks which allows them to offer loans at lower rates as well as provide investors with solid returns. Borrowers typically pay interest rates ranging from about 5% all the way up to 35% in some cases, depending on their risk status.

And with P2P Lending you can kiss the standard bank application process goodbye. P2P sites can turn around loan requests and approvals in a matter of days.

As you can imagine, things have really started to take off for P2P operators. Countless sites have started to gain traction and impressive revenue over the last few years.

Prosper is one peer-to-peer site that was founded in 2006 and already has more than 2 million members and over $ 1 billion in funded loans.

Upstart and Zopa are two other sites that offer peer-to-peer loans for individuals.

Then you have Funding Circle, a site that serves small businesses that most likely couldn’t get through the standard bank’s red tape loan gauntlet. Founded in 2010, Funding Circle started in the U.K. but recently expanded into the U.S. It has lent over $ 500 million to small business owners over the last four years. 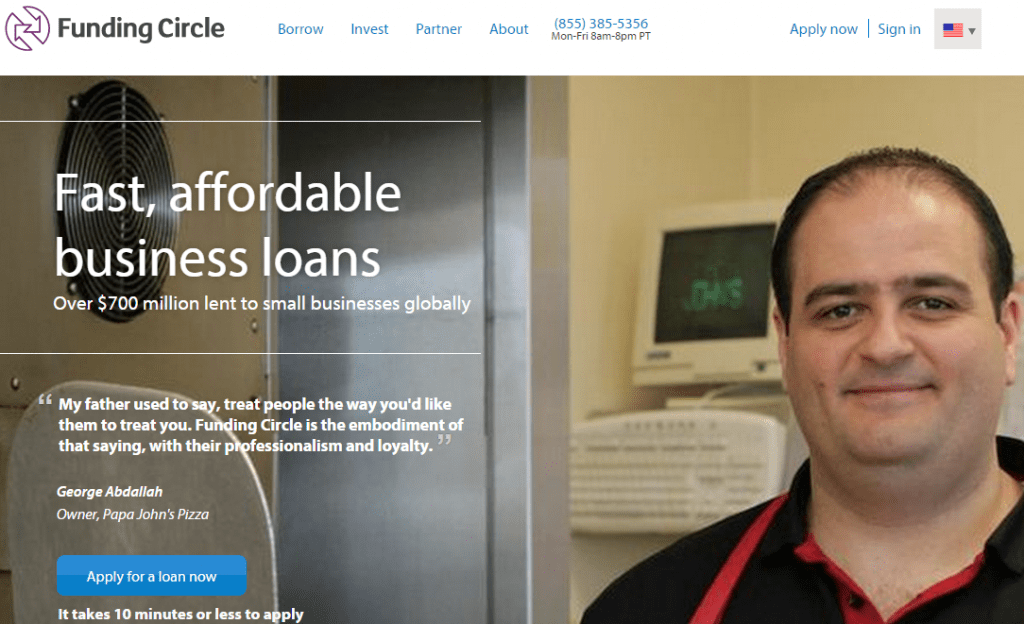 And there are even nonprofit sites like Kiva that allow lenders from well-off nations to loan money to low-income entrepreneurs and students in the developing world. Since its founding in 2005, Kiva has attracted 1.2 million lenders and over $ 591 million in loans with a stellar repayment rate of 98.87%. 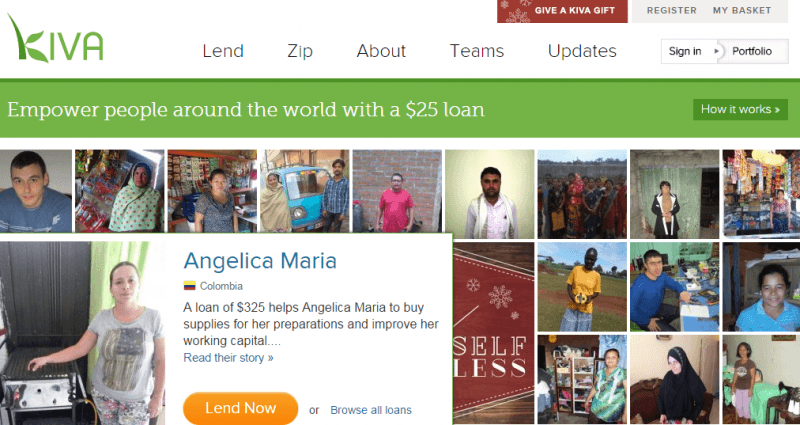 But the biggest site and story goes to industry leader Lending Club, which just held its initial public offering on December 11. Shares soared close to 70% on its IPO day and closed out the day up 56.2%. It is listed on the New York Stock Exchange under the ticker symbol LC.

The San Fransisco-based company raised almost $ 900 million from its IPO and offered over 57 million shares at a price of $ 15 each. That isn’t small peas; based on shares trading in the $ 25 range on IPO day, Lending Club’s valuation topped $ 8 billion.

If it wasn’t for Alibaba’s blockbuster IPO in September of this year, Lending Club would be the breakout tech IPO of 2014. In fact, it was one of the 10 biggest tech IPOs in history. No surprise that Google saw its potential; it invested in Lending Club pre-IPO.

Let’s dig deeper into the industry leader so we can see why it is the top dog and get a better picture of how lenders (aka investors) profit from its loan platform. 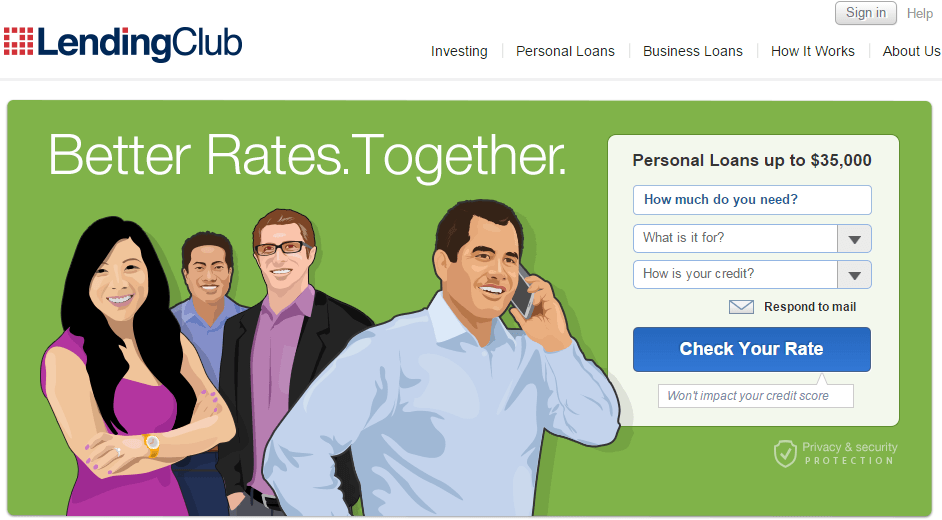 The reason I, along with the masses, like Lending Club’s platform the best from an investor’s standpoint is its strict screening process for borrowers. The average Lending Club borrower has:

A 699 FICO score, a 16.9% debt-to-income ratio excluding their mortgage, 15.8 years of credit history and over $ 73,000 in personal income – that is the top 10% of the U.S. population. Very stringent indeed. This allows Lending Club to find some of the best, highest quality borrowers.

Lending Club’s average loan size is around $ 14,000. But, as I already mentioned, P2P sites like Lending Club pool investor capital and spread the risk across many loans.

With Lending Club, you can invest in fractions of loans in $ 25 increments. Each fraction loan is called a note. Notes come in 36- or 60-month terms depending on the corresponding loan.

These fraction investments allow investors to diversify their portfolios and reduce the impact of any single loan loss.

For example, with say a $ 2,500 investment, you could spread that across 100 notes. One hundred notes is the magic number to aim for since 99.9% of investors that own 100-plus notes of relatively equal size have seen positive results.

Loans are graded according to risk. As you can see in the chart, Grade A loans have a 7.64% average interest rate while Grade G loans have average rates of 24.90% since they are the most risky. 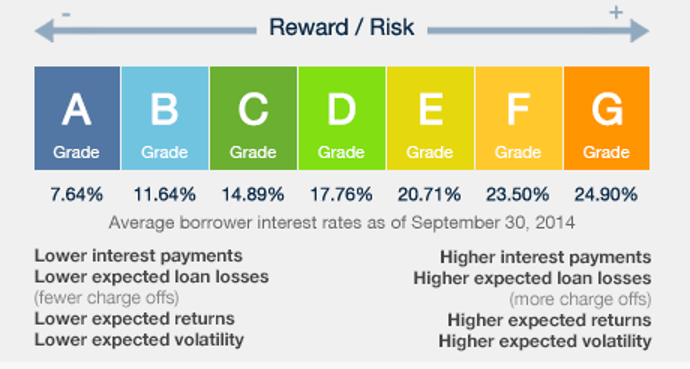 I know those returns look very appetizing, but these interest rates doesn’t fully reflect what you will actually get as a lender since some loans go into default. If that happens, service charges and collection fees can eat into your returns as Lending Club works to get delinquent loans back to current status. This chart paints a clearer picture of the type of return you should expect to see.

As you can see, actual returns on Grade A loans average 4.69% a year, Grade B loans average 6.86%, Grade C loans average 7.89% and so on. Clearly, even accounting for default and collection fees, you can get a solid return on your investments that blow paltry Treasurys and money market funds out of the water. And you get monthly interest payments that you can pocket or reinvest into other loans as you see fit.

If you are interested in becoming a lender, or a borrower for that matter, make sure you check out Lending Club’s detailed information on service and collector fees on its website lendingclub.com. There are few different scenarios that lead to different fees, but nothing is hidden.

A new age of online lending is upon us. A fresh ecosystem of startup companies are changing the ways in which the globe deals with money.

And financial disrupters, like Lending Club, have arrived publically and stated their claim. Countless other companies are starting up peer-to-peer lending sites and are competing directly with the loan business that banks have dominated for centuries. And individuals, like yourself, now have the opportunity to profit like the banks.

Make sure to keep an eye on what happens with Lending Club’s stock price as it is a catalyst for other P2P lending sites going public.

And while investors can also profit by owning Lending Club’s publicly traded shares today, the big money was really made by investors who got in before it went public.

The most immediate winners were venture capitalist firms like Norwest Venture Partners, Foundation Capital and Union Square Partners. Norwest Venture Partners is the largest holder of Lending Club stock with 50.8 million shares, which represents a 14% stake. At today’s share price, its stake is now worth over $ 1.2 billion. It initially invested into Lending Club’s pre-IPO stock at $ 0.27 a share back in August of 2007, which represents a 9,000%-plus gain based on today’s share price.

Lending Club also sold private shares to institutional giants like T. Rowe Price, BlackRock and Wellington Capital Management. All three outfits got Lending Club pre-IPO stock for $ 10.17 a share back in April of 2014, which represents a 145% gain in about eight months. The Wall Street bigwigs and venture capitalists once again got a leg up on the on the average investor by getting in pre-IPO.

But if you missed the train on Lending Club, no worries. I have uncovered another breakout tech IPO that should rock the market in 2015. And I have discovered a way for everyday investors to get in on the deal pre-IPO, before it goes public. And you don’t have to be an accredited investor or a connected Wall Street Pro.

This opportunity allows you to forego all the normal pre-IPO investing requirements such as having $ 200,000 in income for two straight years, $ 1 million-plus in liquid assets, minimum investment requirements ranging from $ 10,000 and up and the inconvenience of having to know “a guy who knows a guy.”

Instead of having to jump through the usual hoops, you don’t have to do ANY of that.

Now you can get in with the smart money – the accredited investors.

Unfortunately I don’t have time to cover all the details in this video. But you can learn more about this pre-IPO opportunity in my special presentation by clicking this link.

Until next time, thanks for being a part of us and good investing.