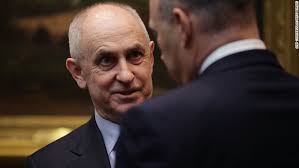 President Trump needs a new director for his National Economic Council after Gary Cohn resigned.
There’s one candidate in the mix that may really please investors: Chris Liddell, who has served as chief financial officer for two blue chip American companies, GM (GM) and Microsoft (MSFT)

Liddell, like the former Goldman Sachs (GS) executive Cohn, has a background in crunching numbers and dealing with Wall Street.

The New York Times first reported on Saturday that Liddell was the “top contender” to replace Cohn. A senior White House official later confirmed to CNN that Liddell is a “possibility” as a replacement for Cohn. Liddell currently serves in the White House as the director of strategic initiatives, working closely with Jared Kushner.

Ivan Feinseth, director of research and chief investment officer at Tigress Financial Partners, said he did not think an ethics complaint filed against Liddell last year because of meetings he held at the White House with executives of companies that he owned stocks in would be a major issue either.

But nothing seems certain just yet. In fact, CNBC’s Jim Cramer reported Monday that Larry Kudlow, a CNBC contributor who served in the Reagan administration, is also a front runner to replace Cohn and would take the job if Trump offered it to him.

Related: One by one, Goldman Sachs alums leave White House

Investors would probably approve of that pick too, Feinseth said. But he thinks Liddell would be the best fit for the job given his diverse business background and experience, as a CFO, dealing with Wall Street.

“Either one would be positive,” Feinseth said, especially when compared to another person cited as a contender for the job — White House trade adviser Peter Navarro.

Navarro, a former professor at the University of California-Irvine, has been one of the staunchest defender of the new steel and aluminum tariffs.

“The market would not like Navarro as a replacement to Cohn. He is not pro-free trade,” Feinseth said.

Feinseth added that investors would be happier if Trump picked someone like Liddell or Kudlow over Navarro because they have more experience dealing with Wall Street.

Kudlow was formerly the chief economist and senior managing director of Bear Stearns — the investment bank that collapsed ten years ago this week. He also has worked at the Federal Reserve Bank of New York.

“It comes down to having a person in the business community versus someone in the academic community,” Feinseth said.