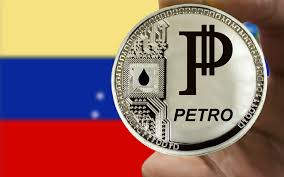 Despite the U.S. Treasury Department warning investors away from it, Venezuela President Nicolas Maduro says the launch of his country’s oil-backed answer to Bitcoin, Petro, raised $ 735 million in its first day.

In a tweet late Tuesday, the Venezuelan leader said that investors had promised 4.8 billion yuan, or $ 735 million in a pre-sale of Petro, the cryptocurrency Maduro hopes will help boost Venezuela’s ailing economy. Countries including the U.S. have imposed sanctions on Venezuela, with the U.S., at least, dubbing Maduro a “dictator.” That comes as the Venezuelan bolívar fuerte has been in free fall partly due to excessive printing of money, while the country still owes its creditors some $ 141 billion.

Maduro has said that he hopes the Petro will help the country skirt Western sanctions, though the U.S. Treasury has warned that it won’t be that easy. In mid-January, the department told potential Petro investors that they could be subject to sanctions against Venezuela.

“Available information indicates that, once issued, the Petro digital currency would appear to be an extension of credit to the Venezuelan government,” the Treasury department said in a statement to Reuters.

If Maduro’s plans pan out, the fund raise will indeed attract a much higher figure than the initial $ 735 million. Maduro has said that he plans to offer a total of 100 million Petros, with a starting price of $ 60 each—roughly the price of a barrel of oil, for a total of about $ 6 billion. Some 824 million tokens have so far been made available.

And he doesn’t plan to stop there. Following on the sale of the Petro, Maduro has said that he plans to launch a cryptocurrency backed by gold next week, Reuters reports.

At any rate, while Venezuela has become a first in launching a government-backed cryptocurrency, it also flies in the face of what made such assets attractive in the first place, according to critics.

“This is a stunt, and I don’t think of it as a cryptocurrency,” Chris Burniske of venture capital firm Placeholder told Bloomberg. “The reason I say that is cryptocurrencies need to be decentralized.”

“The Petro is really a top-down hierarchically controlled asset, and its much more akin to a new way to tokenize oil,” he added, noting that when the first gold ETF appeared, they weren’t considered gold, but a different way of packaging the commodity. “With Petro, we really have a new wrapper around oil.”