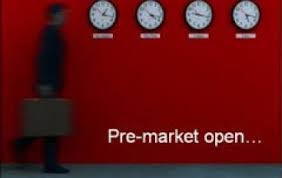 1. More volatility?: US stock futures are pointing down on Tuesday after investors had a long weekend to consider their next moves.
The Dow Jones industrial average and S&P 500 are set to start trading on the back foot following a six-day winning streak.

Global stock markets dropped sharply earlier this month, with many falling by about 10%. They’ve been in recovery mode since then.

European markets are mostly rising in early trading, though the gains are modest.

Most Asian markets ended the day with losses. The Nikkei in Tokyo dropped 1%.

2. Takeover talk: Investors will be monitoring shares in Rite Aid (RAD) on Tuesday after the Wall Street Journal reported that Albertsons is going to buy the rest of the drugstore chain that’s not already being sold to Walgreens Boots Alliance (WBA).

Rite Aid is in the process of handing over nearly 2,000 stores to Walgreens as part of a $ 4.4 billion deal.

3. Earnings: Walmart (WMT) and Home Depot (HD) are two of the bigger names reporting earnings ahead of the opening bell.

Walmart, the nation’s largest private-sector employer, beat Wall Street forecasts last quarter and posted impressive online growth. Since then, Walmart has announced that it is both raising pay and shutting 63 Sam’s Clubs locations, so executives will have a lot to talk about.

Home Depot has also been in the headlines, announcing plans last week to add 80,000 seasonal or permanent part-time workers, the same number it hired last year. To make it easier to fill the jobs it is allowing applicants to schedule interviews online for the first time.

4. Market movers — HSBC, InterContinental Hotels: Shares in HSBC (HSBC) are dropping by about 4.5% in London as investors reacted to the global bank’s latest annual results and news that it plans to raise up to $ 7 billion in new capital in the first half of this year.

Fiona Cincotta, a senior market analyst at City Index, said the earnings showed “a disappointing loss of momentum,” rising exposure to bad debts and profit margins that were under pressure.

Investors were also left disappointed that the company didn’t announce a new plan for share buybacks.

“Overall, though, the bank is in far greener pastures than it was a few years ago,” Cincotta said.

Shares in InterContinental Hotels Group (IHG) are also dropping by about 5% in London after the hotel chain reported its latest annual results.