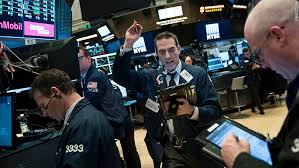 Dow futures fell more than 200 points Friday, capping off a rollercoaster week on Wall Street.
“We’ve got a smorgasbord of negativity this morning,” said Ken Odeluga, market analyst with City Index in London. “It’s been pretty nervous all week and it seems like it’ll stay nervous ahead of the jobs report.”

The Dow fell 540 points over the first two days of the week. It then rebounded 261 points at the open Wednesday., then gave up much of those gains by the end of the day.

The turbulence stands in stark contrast to the unusual calm that had settled over Wall Street for months. The VIX (VIX), a measure of market volatility, has soared nearly 30% this week.

Odeluga said bond yields are spooking stock investors. The 10-year yield reached 2.77% on Friday– it was at about 2.4% at the start of the year.

Some investors are worried they could climb high enough to slow the economy by raising borrowing costs. They also worry that higher returns on bonds will make stocks look less attractive by comparison.

“Those rising rates are making it harder to say there is no alternative to stocks,” said David Kelly, chief global strategist at JPMorgan Funds.

Related: Alan Greenspan – ‘We have a stock market bubble’

Economists expect the U.S. economy added 175,000 jobs in January. Often futures are little changed ahead of a major economic report, but investors are selling ahead of Friday’s report to protect themselves from a downside, Odeluga said.

While Google parent Alphabet (GOOG) posted its first $ 100 billion sales year, it also reported a rare quarterly loss because of a $ 9.9 billion charge related to the new tax bill. Shares were down 4% in premarket trading. Apple (AAPL) reported record sales but disappointing iPhone sales. Amazon (AMZN)shares were slightly higher premarket after posting its first $ 1 billion quarterly profit. But that was putting downward pressure on some traditional brick-and-mortar retailers whose shares have performed well so far this year.