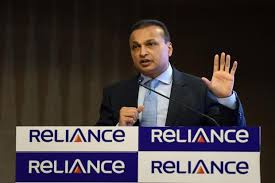 Reliance Industries Ltd expects its earnings to increase further in the coming quarters after they hit a record in the third quarter, helped by the first-ever profit at its Jio telecoms business.

Reliance Jio Infocomm Ltd, in which the conglomerate has invested more than $ 30 billion, reported its first quarterly profit of 5.04 billion rupees ($ 78.97 million). Reliance, India’s largest listed company by market value, said its consolidated net profit rose about 25 percent in the quarter from a year earlier to a record 94.23 billion rupees.

“Earnings are going to be a way bigger. I mean this is just the beginning,” Chief Financial Officer V. Srikanth told a news conference after the results, referring to the consolidated earnings.

Reliance, controlled by India’s richest man Mukesh Ambani, runs the world’s biggest oil refinery in a single location in western India. It has come to the end of a capital expenditure programme in its refining and petchem businesses, Srikanth said, adding the results of the ramp up were expected to fully reflect in earnings in the coming quarters.

Net profit on a standalone basis, which only comprises Reliance’s main refining, petrochemicals and oil and gas exploration businesses, rose to 84.54 billion rupees in the quarter ended Dec. 31, slightly ahead of analysts’ expectations of 83.94 billion rupees.

The company’s gross refining margin, the profit earned on each barrel of crude processed, was $ 11.6 per barrel for the December quarter, outperforming the benchmark Singapore complex margins by $ 4.4 per barrel.

Analysts expect Reliance’s refining margin to improve by as much as $ 2 a barrel in the coming quarters after the commissioning of a petcoke gassifier by March that would cut external gas purchases for its refinery. A plant to convert waste gas from the refinery into petchem products was completed earlier this month.

Anshuman Thakur, head of strategy at the Jio telecoms business, said they expected its profits to improve as more subscribers come on board, while costs will not increase in the same proportion.

Jio, launched in late 2016, has amassed more than 160 million subscribers already through its cut-price 4G voice and internet services offerings which sparked a price war in India’s cut-throat telecoms sector, driving down margins and forcing consolidation.