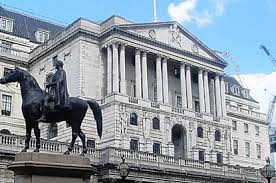 The Bank of England Thursday raised U.K. interest rates for the first time since 2007, in an effort to support the pound and head off inflationary pressures caused by a slump since the U.K. voted to leave the EU 16 months ago.

The U.K. central bank raised its key refinancing rate by 0.25 percentage point to 0.50%, its nine-member Monetary Policy Council voting 7-2 in favor of the move. That effectively reverses the emergency action it had taken in the wake of the Brexit vote in June 2016, when it had felt compelled to prove its determination to support the economy.

“What we’re doing is easing our foot off the accelerator,” Governor Mark Carney said in a press conference following the decision. He added that the step “leaves monetary policy in a position that is still highly supportive for jobs and economic activity.”

The 2016 rate cut, combined with a broader loss of confidence in the U.K. economy due to the Brexit vote, led the pound to slide against other major currencies. It lost over 11% of its trade-weighted value in the four months that followed, forcing up the price of imports. Further rises in the cost of basic inputs such as energy have since driven consumer inflation up, even though the country has the same weak wage dynamics as those seen elsewhere in the developed world.

The BoE is required by law to keep the inflation rate at or below 2%. However, it hit 3% in September and the Bank expects it to edge higher in October before falling back towards target over the next year or so.

The split decision reflects dissent from the MPC’s ‘doves’ who fear that the economy is still too weak for a rate hike. Since the Brexit vote, the U.K. has gone from being the fastest-growing economy in the G7 group of major industrialised economies to being the slowest-growing.

In the statement accompanying the release, the Bank noted that “uncertainties associated with Brexit are weighing on domestic activity, which has slowed even as global growth has risen significantly.” The Bank didn’t give its own view on how many more rate hikes it intends, but financial markets are implying only two more hikes between now and 2020.

“We need those two additional rate increases to get inflation back to target,” Carney said.

Judging by the financial markets’ reaction, it may take more than that. The pound fell by over 1% against the dollar and even more sharply against the euro during Carney’s press conference.

W/ regime uncertain, BOE has to worry about credibility of of its inflation anchor even when domestic conditions call for the opposite. 2/4

A “rate hike when British growth and wages are decelerating is what happens when a central bank faces international vulernability,” tweeted Adam Posen, a U.S. economist who used to sit on the MPC. “BOE has to worry about credibility of its inflation anchor even when domestic conditions call for the opposite.”

The BoE warned in its statement that, whatever the central bank does in the meantime, Brexit is going to make things worse for most Britons in the short- to medium-term.

“Monetary policy cannot prevent either the necessary real adjustment as the United Kingdom moves towards its new international trading arrangements, or the weaker real income growth that is likely to accompany that adjustment over the next few years,” the bank said.

UPDATE: This article has been updated to include comment from the Bank of England’s press conference, as well as market and analyst reaction.