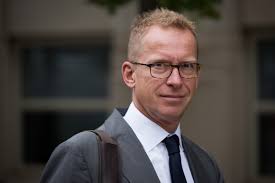 U.S. prosecutors have said that Mark Johnson, formerly head of HSBC’s global foreign exchange cash trading desk, schemed to ramp up the price of British pounds before executing a trade for Cairn, making millions for HSBC at Cairn’s expense.

“They’ve convicted an innocent man,” John Wing, a lawyer for Johnson, told reporters as he left the courtroom in Brooklyn federal court, where Johnson was on trial for nearly four weeks.

Johnson, a 51-year-old British citizen, was the first banker to be tried in the United States as a result of worldwide investigations into the multi-trillion-dollar per day currency market.

The probes have led to about $ 10 billion in fines against several banks and the firing of dozens of traders.

According to court filings, Cairn hired HSBC in 2011 to convert $ 3.5 billion into British pounds sterling in connection with the sale of an Indian subsidiary.

Prosecutors said that Johnson and another former HSBC executive who is also facing charges, Stuart Scott, devised a scheme to drive up the price of pounds by executing a series of trades before carrying out the trade for Cairn.

Such trading in advance of a client’s order to make a profit is known as “front-running.”

During the trial, jurors heard numerous tape recorded phone calls between Johnson and others discussing the trade.

In one call, Scott and Johnson told Cairn and its financial advisor after the trade that a “Russian buyer” had been responsible for a spike in the price of pounds. Prosecutors said that was a lie.

In his closing argument last week, Wing told jurors there was no way to do a massive currency transaction like the one HSBC did without affecting the price. He said that Johnson and his colleagues had tried to get a fair price for Cairn and even given Cairn a rebate.

A lawyer for Scott, who is in Britain and fighting extradition to the United States to face charges, declined to comment. Scott was HSBC’s former head of cash trading for Europe, the Middle East and Africa.

A HSBC spokesman in London declined to comment. HSBC spokesman Robert Sherman said before the trial that Johnson left HSBC earlier this year, and Scott left in 2014.