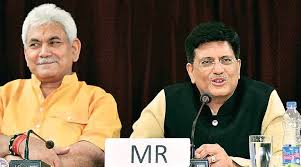 General Electric’s plan to build a diesel locomotive factory in eastern India is proceeding as planned, Railways Minister Piyush Goyal said on Thursday, aiming to allay the U.S. firm’s concerns that India was unilaterally making changes to the contract.

Goyal’s comments came after GE said this week that the Indian government could incur costs and its ‘Make in India’ initiative would be undermined if the railway ministry went ahead with changes to the scope of a joint venture of GE and the state-controlled network.

“Work in the factory is going on as per plan,” he told reporters.

GE had won a $ 2.6 billion contract in 2015 to supply the railways with 1,000 diesel locomotives and began work on a plant in an impoverished corner of eastern India, in one of the largest direct foreign investment projects in the South Asian nation.

But the railways ministry said last week it wouldn’t need diesel engines after all – hoping to save on fuel and maintenance costs – and suggested GE might want to make electric locomotives instead.

The contract to GE is one of the largest to be awarded to a foreign firm since India allowed 100 percent foreign direct investment in parts of its railways, and is part of a $ 137 billion programme to overhaul the vast but dilapidated network by 2020.

The uncertainty over the railway locomotives investment has come at a time when the government is facing political pressure after economic growth slowed to its weakest pace in three years.

A government source said Prime Minister Narendra Modi’s office had intervened after GE raised its concerns and the railways had not made a written proposal for a change of plans from diesel to an all-electric fleet to power the world’s fourth largest rail network.

GE had approached Modi’s office seeking clarity on the issue, an aide to Modi said. “We told them we will look into the matter and that we respect their commitment to the Indian railways.”

GE did not immediately respond to a request for comment.

The apparent policy shift raised fears for the future of investments in the country, especially Modi’s indigenisation drive to create tens of thousands of jobs for a swelling workforce.

Goyal, who took charge of railways last month, said the government had no plans to make sudden changes in policy and there was no threat to the GE plant in Bihar.

“Our government does not make any sudden changes in policy…we take considered decisions…The Marhaura factory is being set up and I think it’s on track.”

But he said he was in talks with GE to explore ways of cutting costs including the railways’ broader goal of electrification which could lead to savings of millions of dollars on fuel costs alone, besides a lower carbon footprint. GE already has investments in India’s power, healthcare and transportation sectors.

“Going for electrification in a much faster manner, is in the interest of the people of India,” he said, adding he had fruitful meetings with GE in that regard and that these were internal discussions aimed at improving the network.

“Can we look at opportunities going forward where we can meet the twin objectives of reducing pollution, saving cost in the overall interest of the country and yet making sure that the contracts or the agreements that are made by the country or by the railways continues to serve the people of India in the best interests of India?” he said.