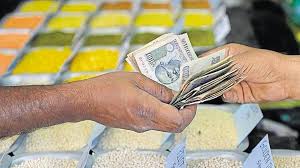 The Indian government is considering a plan to loosen the fiscal deficit target so that it could spend an additional 500 billion rupees ($ 7.7 billion) in the financial year ending in March 2018, two government sources said on Thursday.

Both the officials declined to be named as the plan, aimed at reviving economic growth, is still to be made public.

On Wednesday, Finance Minister Arun Jaitley said the government was looking for ways to lift economic growth, which slipped to a three-year low of 5.7 percent in the quarter to end-June.