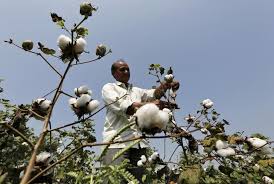 India’s cotton regions forecast to get much needed rain

NEW DELHI (Reuters) – Key cotton producing regions in central India are set for a recovery in rainfall levels, the country’s weather office chief told Reuters on Tuesday, easing concerns for farmers who are betting on the fibre amid rising demand.

Overall rainfall in the country since June 1 is 6 percent below the long-term average, according to data on the India Meteorological Department’s (IMD) website.

India’s weather office said in June it expected monsoon rains, which deliver about three-quarters of India’s annual rainfall, to reach 98 percent of the long-term average this year.

The monsoon, which stretches from June to September, is critical for India’s 260 million farmers because about half of their land lacks irrigation. Farming accounts for 15 percent of India’s $ 2 trillion economy and employs more than half of its 1.3 billion people.

The total area cultivated during summer was largely flat from a year ago at about 105 million hectares at the end of last week, according to farm ministry data, with cotton planting growing at the fastest pace as oilseeds and pulses planting slowed.

However, cotton producing regions in the under-irrigated states of Maharashtra and Madhya Pradesh have received below average rainfall, posing a threat to farmers who have increased planting of the fibre on the back of a surge in demand.

K.J.Ramesh, chief of the IMD, told Reuters this was set to change.

“There have already been signs of recovery,” Ramesh said, adding Maharashtra and Madhya Pradesh would see a significant surge in rainfall.

Though rainfall in the drought-prone cotton producing regions of Vidarbha and Eastern Madhya Pradesh in central India is still below average, the degree of rainfall deficiency has come down this week.

Cotton output in India, the top cotton producing and second largest cotton exporting country, is directly linked to the monsoon, as over 60 percent of the area under cotton cultivation is rain-fed.

Demand for cotton produced in India received a boost after fierce storms in the United States resulted in top cotton buyers flocking to Indian markets.

Planting of the fibre had risen 19 percent as of Friday compared with the same period last year, farm ministry data showed.