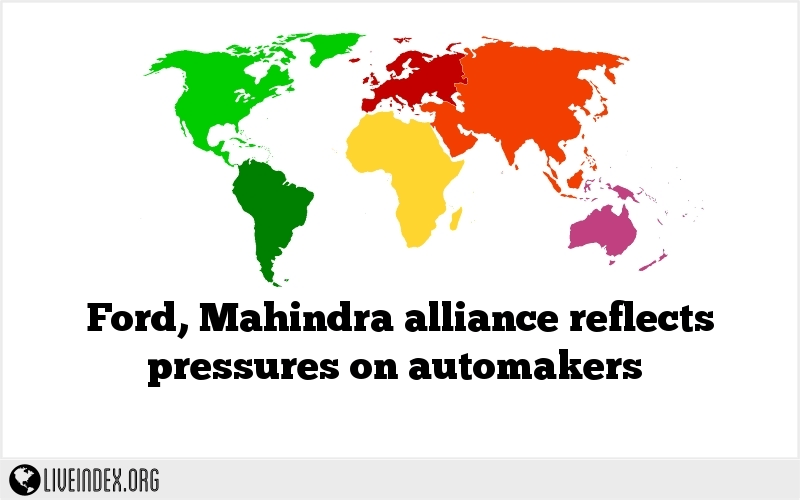 Ford Motor Co and Indian vehicle maker Mahindra and Mahindra Ltd said on Monday they will launch a new strategic alliance, seeking technology sharing and cost saving in a range of activities from purchasing to development of electric vehicles.

The agreement comes with global automakers under pressure as policymakers demand they shift their product lines entirely to electric vehicles over the next two to three decades. At the same time, regional automakers such as Mahindra want access to technology, strong brands and global distribution networks that established companies like Ford can offer.

Ford shares rose 0.9 percent Monday. Investors are watching as Ford Chief Executive Jim Hackett, who took over in May, has begun to steer the automaker in a different direction.

Hackett’s decision to no longer go it alone in India follows a move to hire an outsider to run Ford’s operations in China, and shift production of the Ford Focus for the U.S. market to China, instead of Mexico as previously planned. Hackett has also

Ford and Mahindra said in a joint announcement they would seek ways to collaborate on a wide range of projects for up to three years. Financial terms were not disclosed.

Ford president of global markets, Jim Farley, and Ford’s head of Asia Pacific operations, Peter Fleet, told Reuters on Monday that teams from the companies will start meeting next week to discuss ways to benefit in the short and medium term.

“We are focused on the now and near with this initiative. We want to work on the opportunities that are right in front of us,” Farley said.

In the shorter term, Ford and Mahindra suggested they could benefit from collaborating on distribution of vehicles in India, pooling purchasing and collaborating on forays into ride services.

Ford does not break out results from India, but the company reported a pre-tax loss for the second quarter in Asian and Pacific markets outside of China.

Longer-term projects could include sharing technology or development efforts for electric vehicles, the companies said. For Ford, the Mahindra deal points to a new strategy for dealing with demands from policymakers in many major markets to phase out petroleum-fueled vehicles in favor of electric cars and trucks.

Ford, like global rivals, faces a challenge because electric vehicles engineered for the United States or Europe are too expensive for Indian or Chinese customers. Policymakers in China and India, as well as some European countries, have signaled they want the industry to phase out diesel and gasoline vehicles over the next two to three decades.

“We will certainly be introducing the companies,” Ford’s Fleet said.

India is one of the world’s fastest-growing car markets. Getting more companies to manufacture in India – both for its own market and for export – is critical for Prime Minister Narendra Modi’s government, which needs to create millions of new jobs each year as the workforce expands.

However, global car makers like Fiat Chrysler, Volkswagen (VOWG_p.DE) and General Motors have struggled in India, where nimbler rivals such as Maruti Suzuki and Hyundai Motor have cornered roughly two-thirds of the market.

Turbulence in the Indian economy, and shifts in government policy on vehicle taxes and regulation have further complicated the situation for global automakers. Earlier in September, for example, India’s cabinet approved an increase in the maximum levy on luxury cars and sport utility vehicles to as much as 25 percent – less than two months after deciding on a lower rate of 15 percent as part of the new nationwide goods and services tax.

In May, General Motors said it would stop selling cars in India at the end of this year.

Mahindra and Ford said their prospective alliance would give Ford access to Mahindra’s distribution network in India while Mahindra would benefit from Ford’s market reach in other developing economies.

The U.S. company has already invested more than $ 2 billion in India and plans to spend more to set up a global engineering center in the southern city of Chennai to help adapt products for the local market and changing consumer trends. India has the second-highest number of Ford employees of any country, company officials said.

Ford and Mahindra had a partnership during the 1990s and early 2000s that involved cross share-holdings and was unwound in 2005.

Ford is among the top exporters of cars from India and manufactures and exports vehicles and engines from its plants in Chennai, Tamil Nadu and Sanand, Gujarat.