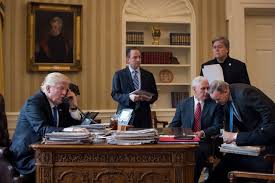 Donald Trump ran for office last year on promises to slash environmental rules and other regulations, arguing that their benefits weren’t worth the costs they imposed on business. After his surprise victory, some investors wondered whether the recent growth of so-called sustainable investing would be lopped off like a mountaintop above a rich seam of coal. Surely, they thought, companies that placed a primary emphasis on social and environmental issues would see their stocks suffer.

Since January, the President has been hacking away at the regulatory forest—making progress there even as other elements of his agenda have been stymied in Congress. So how have mutual funds in the “ESG” space (environment, social and governance) fared? To riff on an old saying, rumors of their death have been greatly exaggerated.

As it turns out, funds in this category have kept up with the market—even as the market itself has had a strong year. Just as significant: Investors are pouring new money into the category at an unprecedented rate. To wit: the net $ 3.5 billion of inflows into U.S.-based retail ESG funds and ETFs from January to July of this year. That surpasses inflows for all of 2015 ($ 2.6 billion), and at the current pace will easily eclipse the record $ 4.9 billion set in 2016.

“This field is global in nature and has a tremendous amount of momentum,” says Jon Hale, director of sustainable investing research at Chicago-based Morningstar. “In some ways, the election has actually galvanized ESG investors.”

Those mutual fund figures are only teensy drops in a larger, responsible-investing ocean. When you include big-money investors like pension funds, high-net-worth individuals, private equity, and sovereign-wealth funds, there was roughly $ 9 trillion in ESG assets for U.S.-listed products. There was $ 23 trillion worth of such assets globally at the start of 2016, according to the biennial Global Sustainable Investment Review, a 25% increase from 2014.

This trend reflects, in part, the growing acceptance of the idea that responsible corporate behavior pays off for shareholders. (For a substantial list of examples, see our Change the World list.) Institutional investors’ thirst for ESG products continues unabated, says Hale, indicating that this is not a fad but something more lasting and transformative. What’s more, sustainable investing is not something localized to America but rather a global phenomenon—minimizing the impact of policy changes at the White House. Take the example of the Paris Agreement: Even if the U.S. withdraws from that climate pact, the rest of the world remains on board, and thus pulls corporate practices and investor assets in that direction.

Demographics—and marketing—are at play here too. Older millennials are now in their mid-thirties, leveling up into their prime earning years and starting to control more investable assets. In time, they will be on the receiving end of one of the biggest wealth transfers in history, with inheritances from the baby boomers. As a generation, millennials are especially drawn to the notion of ESG investing: 86% of them indicate interest in it, according to Morgan Stanley, a level of interest about 20 percentage points higher than among boomers. Millennials are also twice as likely to buy a fund if it operates on a socially responsible thesis.

That kind of information is catnip to financial services companies, and more products are being rolled out to soak up those socially conscious assets. A dozen ESG funds or ETFs have launched in the U.S. in this year alone, says Hale. There are now 187 U.S.-listed open-end funds and ETFs in the space, with total assets of $ 75 billion.

The bottom line: Environmentally and socially conscious investors may not be able to control policy—but they can control where their own money goes. “For the average person who is concerned about this stuff, who wants to know what they can do, one of their questions should be, ‘How do I use the capital I have?’ ” says Lisa Woll, CEO of the Washington, D.C.–based Forum for Sustainable and Responsible Investment. That may be part of the reason why usage of ESG data on Morningstar’s platform, which is employed by asset managers and advisory firms, has quadrupled since Trump’s election.

On the performance front, results are encouraging. While experts in the space are careful not to promise market-beating returns, they also point out there is no apparent penalty for civic-minded investing. Almost half of large-blend ESG funds—a mix of actively and passively managed—have outperformed the S&P 500 so far this year, compared with only 27% of non-ESG funds, according to Hale. In other words, broadly speaking, ESG investors can expect to mimic the wider market, with the added bonus that their money is being put to some good.

The next front in the battle for sustainable investing may very well be: you. Retail investors still account for a very small share of the ESG investing market. That’s largely because companies have been sluggish to incorporate this trend in their 401(k)s. Few retirement ­accounts have a sustainable fund option on their menu.

For investment companies, that’s some low-hanging fruit to pluck. “For most people …most of their assets are likely sitting in their retirement accounts,” says Woll. “There is more and more pressure to get pension and retirement funds to add sustainable options.”

There is also growing interest in a particular subset of ESG investing known as “social impact” investing. Whereas more general ESG funds might aim for merely avoiding companies that they see as bad for society, such as ­fossil-fuel companies or weapons makers, social impact funds aim to invest in companies that actively try to make the world a better place. They also put heavy emphasis on measuring that impact and reporting back to investors. (Think of it as the mutual fund equivalent of the way social entrepreneurs approach philanthropy. Shareholders don’t want merely nice words or thoughts—they want data, and they want it now.)

With more ESG funds to choose from, there are some pitfalls to keep in mind. Some funds have noble intentions but very short track records, making them hard to handicap. Many ESG funds are on the small side, and the lack of economy of scale, along with the extra expenses involved in researching and screening companies, can make them slightly more expensive than non-ESG funds. (The average actively managed, large-blend ESG fund carries an expense ratio of 0.96%, according to Morningstar data.)

That said, these funds have earned respect from the experts:

The Parnassus Fund (PARNX) is the flagship of San Francisco–based Parnassus Investments, one of the longest-standing ESG-oriented fund companies. It boasts one-year returns of 21% and has averaged returns of 10% annually since its inception in 1984. With $ 1 billion under management, Parnassus skews toward reasonably priced “value” stocks—its holdings have an average price/earnings ratio five points lower than that of the S&P 500—and it carries an expense ratio of 0.86%. Current top holdings include Gilead Sciences (gild), Motorola Solutions (msi), and Progressive (pgr). (The firm also runs a fund called Parnassus Endeavor, whose stock picking relies on some of the same screening metrics as the Fortune Best Companies to Work For list; those companies get high marks for treating their employees well, a factor that’s often considered in ESG investing.)

It’s possible to do ESG investing with “passive” funds too. Vanguard FTSE Social Index (VFTSX) owns a basket of 434 stocks; it has risen 21.6% in the past year and 16.7% annually over five years, with holdings skewing toward tech giants like Apple (aapl), Alphabet (googl), and Microsoft (msft). Perhaps most alluring, the $ 3.3 billion fund has a rock-bottom 0.22% expense ratio.

Socially responsible investing extends beyond the world of equities as well. In practice, the social impact of fixed-income investments can be much easier to measure, since bonds are often tied to specific projects. One attractive fund in that arena is TIAA-CREF Social Choice Bond (TSBRX). The $ 1.4 billion fund sniffs out “green” bonds: It will avoid bond issuances that pay for deforestation or the sinking of new oil wells but will happily snap up those that finance positive projects like solar panels or electric vehicles. Its holdings are a mix of corporate, government, municipal, and mortgage-backed securities, more than 40% of them rated triple A.

Investors have largely abandoned the notion that helping the planet or making money is an either/or proposition. “Don’t be afraid to ask your adviser about how to invest that way,” says Hale. “Five years ago, you might have been met with blank stares. No longer.”

A version of this article appears in the Sept. 15, 2017 issue of Fortune with the headline “Times Change, But ‘Green’ Funds Keep Growing.”