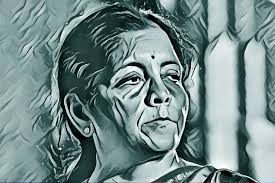 NEW DELHI (Reuters) – Prime Minister Narendra Modi appointed Nirmala Sitharaman as defence minister on Sunday as part of a cabinet reshuffle, as he seeks to get economic growth back on track and modernise the armed forces before national elections in 2019.

Sitharaman, 58, who was promoted from being a junior trade minister, becomes the first female defence minister since Indira Gandhi was in charge of the department when she was prime minister 35 years ago.

She will take over from Finance Minister Arun Jaitley, who held both portfolios but said last week he wanted to concentrate on the economy.

Growth in Asia’s third-largest economy slowed to its weakest pace in three years in the last quarter and government promises to boost manufacturing and create tens of thousands of jobs for one of the world’s youngest workforces have failed to take off.

Sitharaman has been running the trade ministry where she built up a reputation as a tough negotiator.

At defence she will be charged with carrying out a military modernisation programme estimated to cost $ 150 billion to fully equip India’s armed forces.

Modi also named a new minister for the railways to restore confidence in the world’s fourth-biggest rail network after a string of accidents, as well as a new leader to head a planned clean up of the river Ganges that has failed to make headway.

Piyush Goyal, who has been credited with turning around the coal mining sector, will run the railways while remaining coal minister. Nitin Gadkari who heads the highways and shipping ministry will also look after the ministry of water resources and the Ganges rejuvenation department, the government said in a statement.

Four of the nine new ministers appointed by Modi are retired bureaucrats, including K J Alphons, known as Delhi’s demolition man for launching a crackdown on illegal structures in the capital despite facing intense political pressure.

They also include a former police commissioner and a diplomat, reflecting Modi’s faith in bureaucrats to deliver on his goals rather than politicians who are often untested in governance.

Modi also promoted Mukhtar Abbas Naqvi, the minister of minority affairs and one of a handful of Muslim leaders in his party, to the cabinet.

Naqvi has been trying to deflect criticism that the government is either failing to or unwilling to protect Muslims involved in the meat trade after a number of attacks by hardline Hindu vigilantes who are pushing harder for protection of the cow, an animal they consider sacred.

“I congratulate all those who have taken oath today. Their experience and wisdom will add immense value to the council of ministers,” Modi said before leaving for China to attend a summit of the BRICS group of countries – Brazil, Russia, India, China and South Africa.

Critics, however, said the cabinet changes would make little difference since Modi and his office were directly running the government with little real power given to the ministers.

“What’s the fuss about a cabinet reshuffle in a one-man cabinet? Prime minister’s office reshuffle would have mattered more,” said Yogendra Yadav who runs an independent political group.