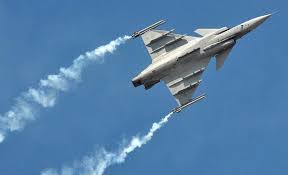 NEW DELHI (Reuters) – Sweden’s Saab will tie up with India’s Adani Group to bid for a contract to make fighter aircraft in India, its chief executive said on Friday, pitting it against Lockheed Martin in a race to equip India’s air force with new jets.

Saab is offering its Gripen fighter and U.S. defence contractor Lockheed its F-16 to supply hundreds of aircraft that India’s air force says it needs to replace its Soviet-era fleet.

Saab and Lockheed have both offered to build a single-engine aircraft locally to comply with Prime Minister Narendra Modi’s signature “Make-in-India” initiative to cut imports and build a domestic defence industry.

Hakan Buskhe, Saab’s CEO, told reporters in New Delhi that the company would invest “billions of dollars” if it won the order, and that it was prepared to export the Gripen from India if the government allowed it to do so.

Saab and Adani have yet to decide on a location for manufacturing, Buskhe said.

Lockheed Martin is also proposing to manufacture F-16s in India for export.

Under India’s new “strategic partnerships” defence policy, a foreign aircraft maker must collaborate with an Indian firm to develop a world-class indigenous aeronautical base that India has struggled to build for decades.

Lockheed has already picked India’s Tata Advanced Systems as its local partner to produce F-16s that will compete for the contract with Saab’s Gripen.

Adani is a $ 12 billion group with businesses ranging from energy and logistics to real estate but it has little presence in defence.

The Indian government will issue a formal request to Lockheed and Saab over the next few days to provide information about their plans to design, develop and produce combat jets in India, a government official told Reuters earlier this week.

Defence analysts say the competition is between Lockheed and Saab, the only companies that have announced joint ventures with Indian companies and a pledge to build locally if they win.

Indian air force officials have warned for years of a major capability gap opening up with China and Pakistan without new state-of-the-art planes, as India’s outdated fleet retires and production of a locally made plane was delayed.

India originally awarded Dassault an order for 126 Rafales in 2012 after the fighter beat rivals in a decade-long selection process, but subsequent talks collapsed.