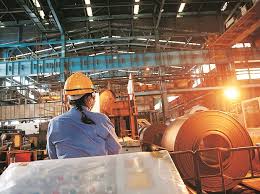 BENGALURU (Reuters) – India’s factory activity unexpectedly expanded in August, snapping back from a contraction the previous month, as disruptions stemming from confusion over a new national sales tax eased, a business survey showed on Friday.

The rebound suggests that India’s economic growth rate, which unexpectedly slipped to three-year low of 5.7 percent in the April-June quarter from a year ago, may also improve in the current quarter.

The Nikkei/Markit Manufacturing Purchasing Managers’ Index rose more than three points to 51.2 in August from 47.9 in July, beating the median economist forecast of 49.3 in a Reuters poll. A reading above 50 indicates expansion.

That was the biggest one-month jump in 5-1/2 years.

“In July, firms indicated that orders, production and purchasing had been postponed due to a lack of clarity about the new tax regime, but they have now been resumed as manufacturers, suppliers and their clients have become more knowledgeable of the GST rates,” said Pollyanna De Lima, economist at IHS Markit, in a release.

That surprise growth slowdown from 6.1 percent in the previous quarter undercut the median forecast of 6.6 percent in the Reuters poll by nearly a percentage point.

In addition, the government’s new tax policy – the Goods and Services Tax – has hurt both manufacturing and services firms by creating confusion over product pricing.

But the GST, which was implemented on July 1 to replace multiple cascading taxes, was expected to cause disruptions only in the near-term. In the long run, it is forecast to benefit Asia’s third-largest economy, a separate Reuters poll showed.

The latest PMI business survey showed both the output and new orders sub-indexes nudged back into expansionary territory, pushing the pace of hiring to the highest in almost 4-1/2 years.

“All sub-sectors posted substantial recoveries, with capital goods outperforming its consumer and intermediate goods counterparts regarding growth rates for production,” noted De Lima in the report.

The PMI report also showed that the speed at which factory costs rose was the weakest in a year, even as output prices rose at the fastest rate in three months while firms adjusted their pricing of products to account for the new national tax.

A subdued economic outlook pushed the Reserve Bank of India to cut its interest rates by 25 basis points in August, but the central bank maintained its neutral stance and said inflation data would drive its future policy moves.