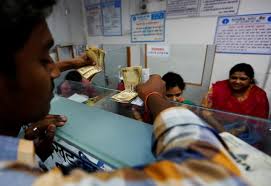 India’s government scrambled to defend its attempt to crack down on the shadow economy by banning high denomination banknotes, after data showed almost all of the abolished currency had made it back into the banking system.

The idea was to make it difficult for hoarders of undeclared wealth, known in India as “black money”, to exchange their undeclared cash for legal tender. But a report released by the central bank late on Wednesday said 99 percent of the 15.44 trillion rupees ($ 242 billion) of banned notes previously in circulation had since been declared to authorities.

Newspapers, some financial experts and opposition politicians rounded on the government on Thursday, with criticism sharpened by separate data showing the economy had slowed to its weakest growth rate in three years.

“It should never have happened,” said N.R. Bhanumurthy, an economist at the National Institute of Public Finance and Policy, a Delhi-based think-tank that operates under the finance ministry. “It was heavily loaded with politics and less with economics.”

At the time, officials said that at least 20 percent of the outlawed currency was expected to be wiped out as tax evaders destroyed notes rather than open themselves to scrutiny by depositing the cash. Modi was quoted by local media as saying that evaders were throwing their notes into the Ganges river.

“We thought that all that money would never come back,” a senior adviser at the finance ministry told Reuters, speaking on the condition of anonymity because of the sensitivity of the matter.

He and two other finance ministry officials said the government had overestimated how much black money was held in cash, rather than assets such as property or gold, and misunderstood the ways in which tax evaders would be able to game the system and legally deposit cash.
HASHTAG CAMPAIGN

Modi’s government on Thursday dispatched officials and ministers to tell the media that the central bank report did not undermine the case for demonetization.

The finance ministry rushed out a lengthy statement detailing the positive impacts, including improved tax collection, a widening of the tax base and new information on possible tax evaders.

The government said the number of tax returns in the year to end-March had grown 17.3 percent.

Around 1.7 trillion rupees of deposited cash was also being investigated by the tax authorities, officials said.

Economists largely expect that, in the long-term, the economy should be boosted by a wider tax base and a shift towards a less cash-based economy. Several analysts said on Thursday it would be wrong to call demonetization a failure, as there were several positive consequences.

Despite the chaos caused as people spent days queuing to swap old notes for new and cash-dependent businesses suffered a slump in sales, many people supported demonetization after Modi framed the decision as a fight for the poor against the corrupt rich.

But data on Thursday showing the economy had grown by 5.7 percent in the three months to end-June, its slowest rate in 13 quarters, will raise further questions about whether the longer-term benefits outweigh the short-term pain.

Critics said that the government’s response was further evidence that Modi’s administration had changed its justification for demonetization to suit the facts.

“The government has changed the goalposts more times than they can count,” P. Chidambaram, finance minister under the previous Congress party government, told Reuters. He was referring to Modi’s promises to uncover black money, remove counterfeit notes and hit at financing of terrorism.

At a local furniture market in New Delhi, some traders said they felt cheated by the news that most of the abolished currency was back in the system after their businesses had suffered for a cause they were told would hurt the corrupt.

“The prime minister’s missile on tax evasion missed the target,” said Pankaj Revri, president of the market association. “Instead of hitting tax evaders, it only hit the economy, businesses and laborers.”