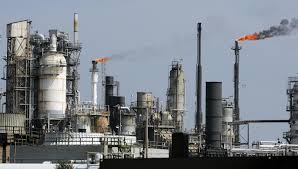 Gulf refineries brace for another hit

Oil refineries are still hunkering down along the Gulf Coast as Tropical Storm Harvey, which came ashore in Texas over the weekend as a Category 4 hurricane, keeps on pelting the region with rain and catastrophic flooding.

Motiva’s massive oil refinery in Port Arthur, the largest in the country, is now running at 40% capacity, according to the company. Earlier Tuesday, it was running at 60% capacity.
“Although weather conditions continue to deteriorate, Motiva’s Port Arthur Refinery remains stable,” Motiva said in a statement.

Harvey is currently moving back toward southeastern Texas and southwestern Louisiana, bringing six to 12 additional inches of rainfall with it, according to the National Weather Service.

Motiva’s move to cut back operations follows ExxonMobil (XOM)’s decision to shut down its oil refinery in Baytown, Texas on Sunday. The company said it discovered roof damage at the plant, which is the second-largest in the country.

In all, eleven refineries are currently offline, and flooding has knocked off 18% of U.S. refining capacity, according to S&P Global Platts.

The reduced capacity means significantly smaller amounts of oil can be turned into gasoline and other products like jet fuel.

While the situation isn’t ideal, it’s also not catastrophic. The U.S. has sizable stockpiles of oil, and the country’s shale oil boom has helped build up reserves of crude. An energy crisis isn’t imminent.

The Motiva refinery is owned by Saudi Arabia. Saudi Aramco, the kingdom’s state-owned oil giant, took full control of the plant in May.