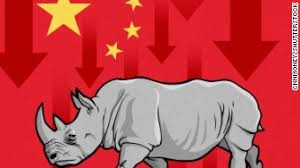 China is escalating the war of words with President Trump over trade.

After expressing “strong dissatisfaction” this week over a U.S. probe into alleged Chinese theft of American companies’ secrets, Beijing on Thursday accused the Trump administration of sabotaging the global trading system.

U.S. Trade Representative Robert Lighthizer announced last Friday that he was formally starting an investigation into whether China is unfairly getting hold of American technology and intellectual property.

Based on a U.S. trade law from 1974, the probe is expected to last at least a year. It could eventually allow Trump to impose tariffs on Chinese imports, or punish Beijing in other ways.

By using U.S. domestic law, the investigation “sabotages the existing international trading system and has also poured cold water on parties that have been working hard to promote the China-U.S. economic and trade relationship,” Commerce Ministry spokesman Gao Feng said Thursday at a regular news briefing.

Trump has so far failed to follow through on much of his combative campaign rhetoric on trade with China, which he has accused of stealing American jobs through unfair practices.

Rather than confrontation, he has opted in office for negotiation while seeking Beijing’s help in efforts to rein in North Korea’s nuclear weapons program.

But he has expressed frustration with the lack of progress in recent weeks.

Trade and North Korea have become growing irritants in relations between the world’s two largest economies.

But other investigations Trump requested earlier this year — into whether steel and aluminum shipped to the U.S. constitute threats to national security — are in limbo, two months after they were expected to be finished.

Those probes could affect major trade partners including China, Canada, the European Union and Brazil.