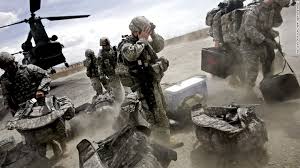 Bruising debate brings a reluctant Trump around on Afghanistan war

U.S. President Donald Trump came around to the decision to allow for more troops to be sent to Afghanistan only after a prolonged internal debate in which he frequently tangled with his top national security advisers.

Trump had repeatedly argued on the campaign trail last year that the long-running wars in Afghanistan and Iraq were a waste of lives and billions of dollars that could be better spent at home.

An emotional visit in April to Walter Reed Hospital, where many grievously wounded soldiers are taken for treatment, only served to harden the president’s reluctance to send more troops.

Trump said he did not want to send more young Americans to battle only to see them lose limbs.

“What are we doing there?” he asked his national security aides, according to a senior administration official.

In a series of interviews, senior administration officials said Trump was hard to persuade but finally – and begrudgingly – agreed to allow for a modest increase in troop numbers, from the current 8,400 to more than 12,000.

He first had to be convinced that the approach he was approving was markedly different from the strategies employed by his two immediate predecessors, George W. Bush and Barack Obama, since he considered them to have failed, the officials said.

In his prime-time speech to the nation on Afghanistan policy on Monday night, Trump conceded that his original instinct on taking office had been to pull out but he was then persuaded of the dangers of a hasty withdrawal.

Putting new emphasis on anti-terrorism goals, he said U.S. troops were needed to prevent the Taliban from taking over Afghanistan and again making it a breeding ground for Islamic militants.

“This is not about nation-building again. We are killing terrorists,” he said.

In the White House discussions, some of Trump’s advisers appealed to his pride in his negotiating skills by saying he could succeed with the Taliban where Obama had failed, in part because Obama made the mistake of announcing that a surge of additional troops to Afghanistan he approved in late 2009 was temporary.

“The president knows that in order to get the Taliban to the table, he knows that he first has to prove that he’s willing to keep pressure on them for as long as it takes, which Obama failed to do,” said one of the officials. “That doesn’t mean he expects to sit down with them in Qatar tomorrow.”
TALIBAN’S UPPER HAND

Trump challenged his advisers to provide clear measurements of how progress can be gauged, with the goal of turning the tide in a battle in which the Taliban appears to have gained the upper hand in recent months.

“He wants to be shown that we’re winning,” said one official. “They had to develop the metrics for that in advance before he would agree to it. He doesn’t want to be told in two years that it’s just as bad as it was 2017, but not worse. If that happens then we’re really talking about a withdrawal. He made that clear.”

While Trump was joined in his skepticism by his chief strategist Steve Bannon, who was fired on Friday after months of power struggles inside the White House, multiple officials said the debate was less about Bannon and more about Trump himself.

The argument that White House chief of staff John Kelly, Defense Secretary Jim Mattis and White House national security adviser H.R. McMaster made was that previous efforts faltered because the Afghan and Pakistani governments did not step up and do what is required of them to help defeat the Taliban and deny terrorists a haven in Afghanistan.

The three – who have all had distinguished military careers – also raised the specter of Iran’s involvement in Afghanistan, an argument that helped given Trump’s desire to block Tehran’s expansionism in the Middle East, officials said.

“It was hard to put together for him all the pieces of a complicated puzzle that includes not just the three major regional players, but also India, China, Russia, and Iran,” said one official.

“But the idea that he could succeed where his predecessors had failed had a certain appeal. So did the idea of emphasizing this is part of the war against Islamic terrorism, not an effort to rebuild Afghanistan, something he had consistently opposed,” the official added.

The new Trump strategy puts greater emphasis on the responsibilities of the Pakistani and Afghan governments.

Another important factor, the officials said, was convincing Trump that the withdrawal he had advocated for years would force him to shoulder some of the blame for the Taliban victory that surely would follow.