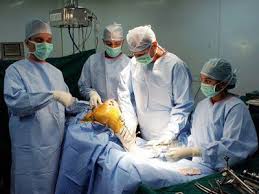 NEW DELHI (Reuters) – India has capped prices of orthopaedic knee implants, in the country’s latest move to bring down prices of medical devices.

Rajiv Nath, Forum Coordinator for the group, said that some of the six Indian knee implant manufacturers found the prices “perfect and reasonable”, and that the caps would help patients.

Major international pharmaceutical companies have protested against India’s price controls on drugs and medical devices, arguing this will curb innovation and could hurt future investment plans.

Johnson & Johnson, for example, which makes artificial knees, has been worried about potential price curbs in this area.

The Medical Technology Association of India, which includes several foreign companies such as Johnson & Johnson among its members, said in a statement that it was reviewing the order and may offer suggestions for its implementation later.

Johnson & Johnson did not immediately respond to a request for comment.