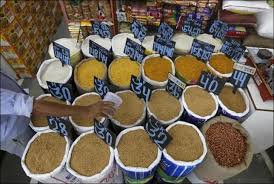 India’s consumer inflation is expected to have picked up in July after easing for three straight months, with food prices back on the rise, but is expected to remain well below the central bank’s target.

The consumer price index, the main policy target of the Reserve Bank of India (RBI), likely rose 1.87 percent in July from a year earlier, according to a Reuters poll of economists, compared with an increase of 1.54 percent in June.

The wholesale price data will be released around 0630 GMT on Monday, followed by consumer prices around 1200 GMT.

Bountiful monsoon rains this year are expected to lead to another bumper harvest, further dampening food prices, which contribute near 50 percent of the consumer price index.

Retail food prices had contracted for two months through June from a year earlier.
RBI UNDER PRESSURE

Disinflationary pressures allowed the RBI to cut its main policy rate early this month by 25 basis points to 6 percent, the lowest since November 2010.

It was the first easing by an Asian central bank this year. But the RBI retained its “neutral stance” and warned inflation could pick up again.

The RBI expects retail inflation could accelerate to 3.5 percent to 4.5 percent in October-December..

The government called on Friday for more rate cuts as it flagged risks to economic growth and budget targets.

In his mid-year economic survey, Chief Economic Adviser Arvind Subramanian said there were downside risks to the official growth forecast of 6.75-7.5 percent for the fiscal year to March 2018.

The launch of a national Goods and Services Tax (GST) in July has caused chaos on the ground as complex rules have left companies confused on how to price their products.

Combined factory and service sector activity slumped in July to the lowest since March 2009, according to one private survey, though analysts believe the disruptions from the new tax will start to moderate soon and longer-term it will boost domestic trade.

In his report, Subramanian said there was a considerable scope for monetary easing as the inflation was undergoing a “structural shift.”