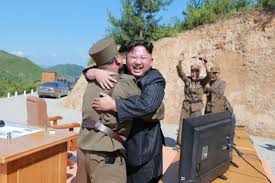 UNITED NATIONS (Reuters) – The United States could shortly broaden talks on a push for stronger United Nations sanctions on North Korea to include all 15 Security Council members, signalling a likely deal with China on new measures, diplomats said on Thursday.

Since North Korea’s July 4 launch of an intercontinental ballistic missile (ICBM), the United States has been negotiating with Pyongyang ally China on a draft resolution to impose new sanctions on North Korea, which fired a second ICBM last Friday.

“We have been working very hard for some time and we certainly hope that this is going to be a consensus resolution,” China’s U.N. Ambassador Liu Jieyi told Reuters on Thursday.

Some diplomats said the United States could give the draft resolution to all 15 council members as early as Thursday.

Typically, the United States and China have agreed sanctions on North Korea before formally involving other council members. A resolution needs nine votes in favour and no vetoes by the United States, China, Russia, France or Britain to be adopted.

The United States has been informally keeping Britain and France in the loop on the negotiations, while U.S. Ambassador to the United Nations Nikki Haley said China had been sharing the draft and negotiating with Russia.

U.S. President Donald Trump’s administration has been frustrated that China has not done more to rein in North Korea and Washington has threatened to impose new sanctions on Chinese firms doing business with Pyongyang.

Haley said on Sunday the United States was “done talking about North Korea” and China must decide if it is willing to back imposing stronger U.N. sanctions. But she has also acknowledged that Russia’s engagement on the draft resolution would be the “true test.”

Russia noted on Thursday that the permanent five (P5) veto powers had yet to formally discuss the draft. It was not immediately clear if poor relations between Russia and the United States, which imposed new unilateral sanctions on Russia on Wednesday, would hamper the negotiations.

“Maybe there is a bilateral agreement (between Beijing and Washington), but that’s not a universal one,” he said, adding that while he was aware of what might be in the resolution he had not seen “the draft as it stands now.”

The U.S. mission to the United Nations declined to comment.

Moscow has disagreed with assessments by Western powers that Pyongyang has launched two long-range missiles, saying they were mid-range. Diplomats say China and Russia only view a test of a long-range missile or a nuclear weapon as a trigger for further possible U.N. sanctions.

North Korea has been under U.N. sanctions since 2006 over its ballistic missile and nuclear programs and the Security Council has ratcheted up the measures in response to five nuclear weapons tests and two long-range missile launches.