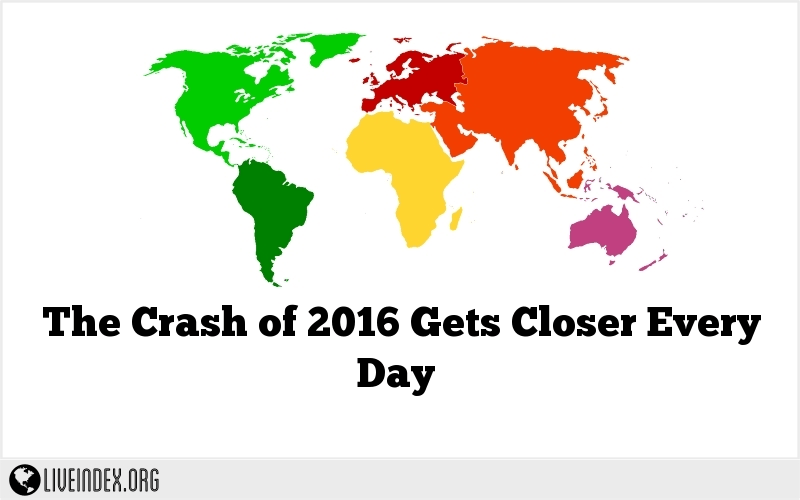 The Crash of 2016 Gets Closer Every Day

The denial of fundamental economic principles is setting the world up for another Great Crash.

Although wages have been flat or declining since the West started following Thatchernomics and Reaganomics in the late 1970s and early 1980s, the stock market has risen to all-time highs. Billions – hundreds of billions – have been made by individuals on Wall Street.

Meanwhile over 60,000 factories have closed in United States just in the past 14 years, and over 50 million Americans are either unemployed or underemployed.

In Europe, with the exception of the Scandinavian countries who are ignoring our economic advice, the situation is very similar. Other than Germany, which is becoming a major extractor of wealth from the rest of the EU, European countries and Great Britain are following the same fallacy that has been driving US economic policy for more than 30 years.

On June 29, The Financial Times with reporting by Sam Fleming and Claire Jones, lead its front page with the warning that “Bank for International Settlements warns ‘Euphoric’ Markets.”

The article notes that capital markets are “extraordinarily buoyant,” according to the Bank of International Settlements (BIS), and argues that central banks around the world “should not fall into the trap of raising rates ‘too slowly and too late.’”

They correctly point out how low interest rates have caused an explosion worldwide of corporate debt.

Meanwhile, not noted in the article, for-profit corporate banks have discovered that instead of lending money to working-class people to buy homes or cars, it has become more profitable to simply borrow from central banks at very low interest rates, often less than 1 percent, and then park that money in government treasuries which pay 2 or 3 percent, in effect loaning the country’s money back to the same government at a profit.

Similarly, huge transnational corporations from tech companies to pharmaceutical companies, are hoarding cash in offshore tax havens where it’s not available to stimulate local economies, or they’re making acquisitions based on fiscal strategies rather than how to best manufacture the best product.

Completely lost in the debate between the BIS and the IMF over simulative central-bank strategies is a simple economic fact. Economies are driven by demand, and the principal component of demand is wages.

Instead, The Financial Times noted that the Bank of International Settlements is “calling for policymakers to halt the steady rise of debt burdens around the world and embark on reforms to boost productivity.”

Productivity has been rising steadily in the United States since the 1930s, but since the early 1980s it has become uncoupled from wages, which have remained flat or fallen.

Even as individual companies become more productive, producing more goods with lower costs and less labor, the economy has been stagnant because there is little demand for those goods. And that’s because of the simple Econ 101 maxim, which dates back to Adam Smith, that demand is what drives economies, and that wages are the principal driver of demand.

As wages flatten or drop, and as the ability of unemployed people to continue buying things is cut by the Republican efforts to cut long-term unemployment over the past six months, demand falls.

Meanwhile, large corporations, wealthy people, and banks are all making money simply playing with money. This “financialization” of our economy is driving us to the edge of a massive crash.

Policy makers, from the Fed to the IMF to the BIS to the US Congress and the White House should all be looking back at the lessons of the 1930s – because we’re about to learn them all over again.

Wages for working people, not the wealth of the rich, corporate income, or banking profits are what both drive and sustain an economy. As long as those wages remain stagnant or falling, there will not be sufficient demand to keep an economy from collapsing under the weight of its own high-end gamblers and the growing debt of its young and working-class people just trying to get by.

While inflation hawks are hysterical about the possibility of our repeating the inflation of the 1970s if central banks raise their rates or stop buying bad corporate or good government debt, they fail to remember that most of the inflation of that era was driven by oil price shocks, and that it did not, by and large, impair the ability of average people to continue to gain wealth and buy homes.

(With rare exceptions, inflation is not caused by government borrowing or “money printing,” but by shortages in essential commodities. In the United States in the 1970s it was principally oil shortages that drove inflation; more recently in Zimbabwe it was food. The intentional hyperinflation of Germany in the 1920s was simply a “screw you” response to the Treaty of Versailles, which imposed punishing debt on Germany for World War I, and which John Maynard Keynes warned would provoke the next great war. He was right and the conventional wisdom among international policymakers was wrong.)

History – and the examples of Germany and Scandinavia – show us that high levels of unionization, trade and taxation policies that favor the working class over the rich, and heavy regulation of the banking and speculative industries will build a strong and healthy working and middle-class, and thus a strong and healthy economy. Instead, the United States and much of the EU still cling to Thatchernomics and Reaganomics, and the result is the continuing decline of both economies.

Until the corporate elite and our billionaire class are under control, and our working class once again can enter the middle class, we stand at the precipice of a great crash. Without vigorous governmental action to radically reduce student and working family debt, increase wages, and suppress speculation, that crash comes closer to us every day.