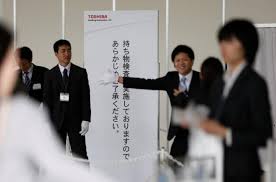 Japan’s Toshiba (tosbf) has pushed back its timeline to clinch a sale of its prized flash memory chip unit, saying the $ 18 billion deal was being held up due to differences of opinion within the consortium chosen as preferred bidder.

The delay came as the conglomerate sued its chip business partner Western Digital (wdc) for interfering in the sale, one day after the U.S. firm resubmitted a bid for the unit. The lawsuit pushes acrimony between the two to new heights and further complicates prospects for a deal.

Scrambling to cover billions of dollars in cost overruns at its bankrupt Westinghouse nuclear unit, Toshiba had pledged to have a signed agreement for the sale of the unit – the world’s No. 2 producer of NAND chips – by Wednesday, the day of its annual shareholders meeting.

The hotly contested auction has seen a consortium, led by Japanese government investors and including U.S. private equity firm Bain Capital, chosen as preferred bidder but the group’s offer was only hastily and awkwardly put together this month.

That bid has been largely orchestrated by Japan’s trade ministry, which is keen to keep semiconductor technology under domestic control.

Chief Executive Satoshi Tsunakawa said the firm was now aiming for an agreement with the preferred bidder consortium as early as possible and a completed transaction by the end of the financial year in March.

“It is taking time to smooth out differences in opinion among members of the consortium,” he said, after apologizing for a string of humiliating setbacks that include Toshiba’s demotion to the second section of the Tokyo bourse.

There appears, however, to be little likelihood of a quick and smooth conclusion to the deal.

Western Digital, which jointly runs Toshiba’s main semiconductor plant, claims that its partner is breaching joint venture contracts and is seeking a U.S. court injunction to prevent any deal that does not have its consent – actions that prompted Toshiba’s lawsuit on Wednesday.

Toshiba executives continued to offer a string of mixed messages on their willingness to resolve the spat with the California-based firm.

On one hand, Tsunakawa lambasted the Western Digital at the shareholders meeting, saying it had been interfering in the sale. But the head of Toshiba’s chip unit also said the Japanese company was prepared to make concessions and hoped to resolve the dispute as soon as possible.

Toshiba argues that Western Digital’s bid for the memory unit presents anti-trust issues and is too low in price.

Western Digital has said it offer meets the 2 trillion yen ($ 18 billion) minimum demanded by Toshiba – a figure that appears to match the amount offered by the preferred bidder.
WESTERN DIGITAL TRIES AGAIN

It is not clear if the terms of the bid that Western Digital resubmitted on Tuesday with partner U.S. private equity firm KKR & Co LP had significantly changed.

Western Digital said it will provide debt financing to facilitate a sale. Sources with knowledge of the matter have said a state-backed fund, the Innovation Network Corp of Japan (INCJ), and the Development Bank of Japan (DBJ) which are currently part of preferred bidder consortium – would be invited to join the resubmitted offer.

While it was not immediately clear what parts of Toshiba’s talks with the preferred bidder consortium were taking time, sources have said some Toshiba board members are concerned about technology leaks to South Korean chip rival SK Hynix Inc , which is part of the consortium and will provide Bain with financing.

Western Digital has also said it is strongly opposed to SK Hynix’s participation and has threatened further legal action.

Toshiba’s lawsuit, filed with the Tokyo District Court, seeks around $ 1 billion in damages.

The Japanese firm also said it had shut out Western Digital employees based outside their Yokkaichi chip plant from accessing information relating to the two companies’ joint venture – a move that threatens to impede R&D work on next-generation NAND memory chips.

Western Digital declined to comment on the lawsuit. It said in statement it had reiterated its concerns about the sale process and SK Hynix’s participation to Toshiba.

The U.S. court hearing for its injunction request is scheduled for July 14.