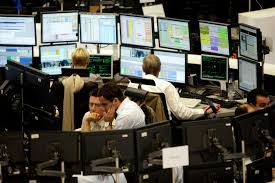 In fact it’s odd how fatalistic people seem to be. We used to furiously debate where and when we’d find the canary in the coal mine warning of an imminent market reversal to pounce on. Now, there seems to be blanket resignation that the trend is your master.

But if there’s one thing we do know from experience, it’s that all of these things are capable of turning on a dime. And we need to keep watching for signs of the sine wave shifting.

This coming Friday we’ll get some inflation (or lack thereof) numbers out of Europe and the U.S. For the moment, price data is the most important economic releases we get and have the greatest potential to provoke a reaction. Tame outcomes seem to be the clear base case. Which makes them even more important.

Traders may, at their peril, ignore the message being sent by Chair Yellen when she speaks tomorrow, but the latest HICP and PCE data will speak for themselves. It looks and feels like the Treasury 2s10s is trying to form a base near the 80 basis point level. Where we end the week around this pivot could be important.

Data misses and a Washington horror show have contributed to a really negative vibe surrounding the dollar. The only problem, is that in the last month, the dollar index hasn’t gone anywhere and has spent the past week on the top side of the 21-day moving average. The index, currently near 97.40, will look quite good if it manages a move over 98 and horrid below 96.30.

Oil has more written about it signifying little than any other asset. Why it moves and how far is too often a mere random walk. Its price figures into every econometric forecast and yet no one can credibly predict its movements. We’re six months into the year and WTI has already had five big moves. Extrapolation is a bad idea. For all its whipping around, however, the charts will tell very different stories below $ 42 and above $ 44.50.