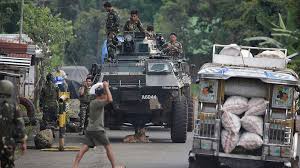 MANILA Pro-Islamic State militants stormed a school in the southern Philippines early on Wednesday and are holding several students hostage, police said, on the same island where fighting between government troops and Islamists has entered its fifth week.

A police report said about 300 armed men, among them members of the Bangsamoro Islamic Freedom Fighters (BIFF), stormed a school in Pigcawayan town in North Cotabato province on Mindanao island and were holding some students captive.

Members of the BIFF were engaged in a gunbattle with the military, Chief Inspector Realan Mamon, the police chief at Pigcawayan, said in a radio interview.

“We can confirm that they occupied a school and there were civilians trapped. We are in the process of determining how many were trapped and their identities,” Mamon said.

Pigcawayan is 190 km (120 miles) south of Marawi City, where BIFF militants, along with fighters from other groups allied to Islamic State, have been holed up and fighting the Philippines military since May 23.

Philippine aircraft and troops launched a renewed push against the militants in Marawi City on Tuesday and a military spokesman said the aim was to clear the area by the weekend Eid festival, although there was no deadline.