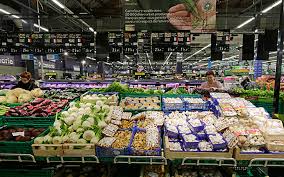 NEW DELHI India’s retail inflation eased to the lowest level in at least five years in May on cooling food prices, bolstering hopes for an interest rate cut by the Reserve Bank of India (RBI) later this year.

Consumer prices rose by an annual 2.18 percent last month, compared with a 2.99 percent gain in April, data released by the Ministry of Statistics showed on Monday.

The rise was lower than the 2.60 percent forecast by economists in a Reuters poll, and was the lowest since India started publishing an economy-wide consumer price index in 2012.

With headline inflation undershooting the RBI’s mid-term target of 4 percent for the past seven months, pressure has mounted on the central bank to resume interest rate cuts to juice up economic growth that has hit the lowest level in more than two years.

“This clearly shows that the (inflation) risk is on the downside,” said Gaurav Dua, research head at brokerage Sharekhan Ltd in Mumbai. “This opens up a scope for rate cut in August.”

The policy repo rate has been on hold since October when the RBI lowered it by 25 basis points to 6.25 percent.

The RBI now expects retail inflation to range between 2.0-3.5 percent between April and September, lower than its previous forecast of 4.5 percent, and 3.5-4.5 percent from October-March, down from 5 percent earlier.

While falling commodity prices and a rally in the rupee, which has made imports cheaper, have tamped down price pressures, the biggest comfort policymakers are drawing is the forecast of a normal monsoon this summer.

Retail food prices fell 1.05 percent last month from a year ago, compared with a 0.61 percent gain in April.

Bountiful monsoon rains could result in another bumper harvest for the South Asian nation, which is already sitting on a huge inventory of food grains from last year’s record harvest.

That prospect, however, will not cheer millions of India’s debt-ridden farmers who are struggling with low prices amid a glut of produce such as lentils, oilseeds and cereals.

Further falls in prices could compound their woes and fuel discontent that has triggered protests in the big agrarian states of Maharashtra and Madhya Pradesh, where police shot dead five protesting farmers last week.