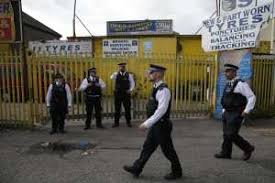 LONDON British police and security services had previously investigated one of the Islamist militants who carried out Saturday’s attack in London, but with resources scarce, he was not deemed enough of a threat to warrant close monitoring, police said on Monday.

The news raises questions about the police’s judgment and increases pressure on Prime Minister Theresa May, who three days before a national election is facing criticism for overseeing cuts to police during her years as interior minister.In Britain’s third Islamist attack in as many months, three men on Saturday rammed a van into pedestrians on London Bridge before running into the Borough Market area, where they slit throats and stabbed people indiscriminately. Seven people were killed and dozens wounded.

All three attackers were shot dead by police, who made at least a dozen arrests in east London on Sunday and carried out further raids on Monday.

Police on Monday named two of the attackers and said they were trying to identify the third. One, 27-year-old Khuram Shazad Butt, was a British citizen born in Pakistan who had already been investigated by police and Britain’s domestic spy agency MI5.

“However, there was no intelligence to suggest that this attack was being planned, and the investigation had been prioritised accordingly,” police said.

Another attacker, 30-year-old Rachid Redouane, went by the alias Rachid Elkhdar and claimed to be Moroccan or Libyan, police said. He and Butt lived in the same area of east London.

One of Butt’s neighbours, Ikenna Chigbo, told Reuters he had chatted with Butt – also known as “Abz” – just hours before the attack on Saturday and said he appeared “almost euphoric”.

“He was very sociable, seemed like an ordinary family man. He would always bring his kid out into the lobby”.

Another neighbour, Michael Mimbo, told Reuters that Butt supported the north London football team Arsenal. One of the dead attackers has been pictured wearing an Arsenal shirt.

Mimbo said Butt had grown a longer beard and worn traditional Islamic dress more often over the two years he had known him, but showed no sign of radicalisation.

“As an individual he was a cool, calm guy. One of my friends would let Abz babysit his daughter,” Mimbo said.

Police said on Monday they had released all 12 people arrested in the neighbourhood on Sunday without charge. However, police were investigating what appeared to be Molotov cocktails in the back of the van, Sky News reported.

The rampage followed a suicide bomb attack which killed 22 adults and children at a concert in Manchester two weeks ago, and an attack in March when five people died after a van was driven into pedestrians on London’s Westminster Bridge.

May described the latest incident as “an attack on the free world”.

But with Britons due to vote in a national election on Thursday, her decision to reduce the number of police officers in England and Wales by almost 20,000 during her six years as interior minister from 2010 to 2016 shot to the top of the political agenda.

May did not answer repeated questions from reporters on her cuts, but said counter-terrorism budgets had been protected and police had the powers they needed.

Police said they had to prioritise resources on suspects who were believed to be preparing an attack or providing active support for one. Butt did not fall into this category when they last investigated him.

“It’s just a fact that, over the last seven years, we as a city have lost 600 million pounds from our budgets. We have had to close police stations, sell police buildings, and we’ve lost thousands of police staff,” said London Mayor Sadiq Khan, a member of the opposition Labour Party.

He said many people were “very worried that she was at the Home Office for all this time, presided over these cuts in police numbers, and now is saying that we have a problem”.

May hit back by criticising Corbyn, a pacifist who has opposed some security legislation in parliament and expressed reservations in the past about police responding to armed attackers with “shoot-to-kill” tactics.

Corbyn’s critics have often accused him of weakness on terrorism, citing his sympathy for members of the Palestinian group Hamas, Lebanon’s Hezbollah and Sinn Fein, the former political wing of the Irish Republican Army. The IRA ran a 30-year armed campaign against British rule in Northern Ireland.

The Conservative Party’s lead over Labour has narrowed markedly from 20 points or more when May called the election in April to a range between one and 12 points now, although the Conservatives are still widely expected to win a majority.

Christine Archibald, a 30-year-old Canadian who had worked in a shelter for the homeless before moving to Europe to be with her fiancé, was the first of those who died to be named.

Thousands attended a vigil on Monday evening to honour the victims outside London’s City Hall, close to London Bridge.

Before holding a minute’s silence, Khan, the first Muslim to be elected mayor of a major Western European city, said: “I want to send a clear message to the sick and evil extremists who commit these hideous crimes. We will defeat you. You will not win.”

The Islamic State militant group, which is losing territory in Syria and Iraq to an offensive backed by a U.S.-led coalition, has claimed responsibility for the attack.