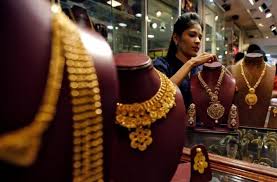 MUMBAI India will tax gold at a rate of 3 percent under a new nationwide sales tax that comes into effect on July 1, the government said on Saturday.The Goods and Services Tax (GST) on gold, which was lower than industry expectations of around 5 percent, will replace a number of federal and state levies.

“In the case of gold, keeping various factors in mind, because there was an extensive debate … we finally reached a consensus of taxing gold at 3 percent,” Finance Minister Arun Jaitley told reporters in New Delhi after a meeting of the GST Council.

Gold jewellery, silver and processed diamonds will also be taxed at 3 percent, while the tax on rough diamonds will be 0.25 percent, revenue secretary Hasmukh Adhia said.

The gems and jewellery industry in the world’s second-biggest gold consumer welcomed the tax rate, saying it will help the sector become more compliant and mature.

“Currently, the industry pays taxes around 2 to 2.5 percent, so 3 percent is almost as good as no impact,” Aditya Pethe, a director at WHP Jewellers said. “With this taxation, many unorganised players will be encouraged to enter organised trade.”

Anticipating a higher tax rate, Indian jewellers have been restocking inventory, a move that was expected to hit imports of the metal in the second half of the year when gold demand is higher due to festive season buying.

Prime Minister Narendra Modi’s government is pinning hopes on the GST to boost economic growth that slumped to 6.1 percent in the quarter to March.

The India head of the World Gold Council said the government’s decision on gold was an encouraging step and would help stabilise an industry in which millions are employed.

But with customs duty of 10 percent, the total tax on gold is still high and will continue to have an impact on the jewellery industry, Somasundaram PR, Managing Director, India, World Gold Council, said in a statement.

“This may be an opportune time for the government to cut the import duty and bring down the total tax on gold significantly so unauthorised imports are totally eliminated and the industry embraces transparency in letter and spirit under GST,” he said.

The tax on cotton will be 5 percent, ready-made garments 12 percent and hand-rolled Indian cigarettes or bidis 28 percent, Jaitley said.

New Delhi has already decided to tax telecoms and financial services at a uniform rate of 18 percent and transport services at 5 percent.