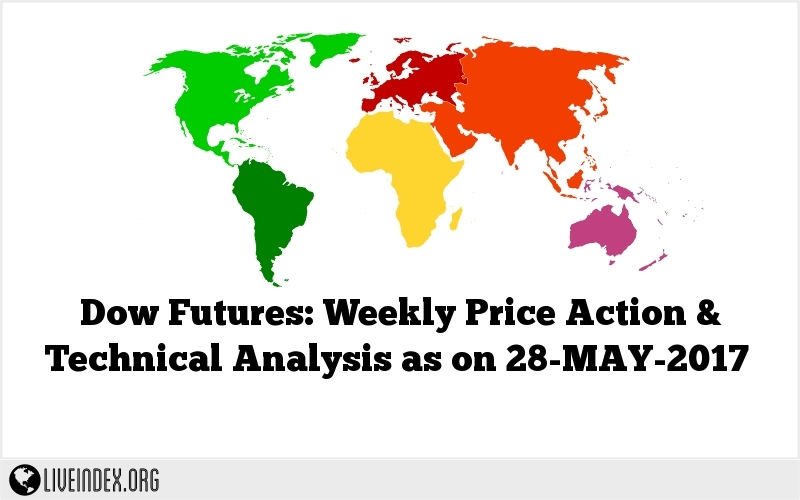 Dow Futures: Weekly Price Action & Technical Analysis as on 28-MAY-2017

After the strong recovery by the end of the previous week, there came a bullish week that took out the Monthly High.

The market is currently in a bullish setup made by a Follow Through model, and the target is the area level of 21550.

Since Friday was an inside bar that didn’t manage to reach to upper Bollinger band, a thrust down may appear at the beginning of the coming week. If this is the case, and that thrust down is going to take out the Low of last Thursday as well, that is going to be a sign of weakness. Later on, If after the first bounce a follow through down is going to be made, we are very likely in a bearish sentiment to test the Weekly Low. Another strong indication for weakness would be taking out the High of Friday first, and then a thrust down below Friday’s Low. If the Weekly’s Low is taken out in the coming week, we most likely going to test the Monthly Low.

On the other hand, a false thrust down (below Friday’s Low, respecting Thursday’s Low or below Thursday’s Low but no follow through) would be a gift to go long once the High of Friday is taken out.

The current Month is going to close at Wednesday. The current shape of the Monthly bar is very bullish, a HH HL bullish Pinbar, and the question is whether the 2.5 days remaining are going to spoil the bullish enthusiasm, or even increasing it by another thrust up that can easily reach the target at 21550.

The next major target above is the target of the Spring bullish Quarterly bar at the last quarter of 2016, pointing at the area level of 22430.